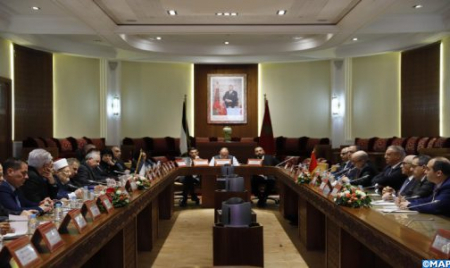 Speaker of the House of Representatives, Rachid Talbi El Alami, received on Monday at the headquarters of the House in Rabat, a delegation of Palestinian personalities, on the occasion of the celebration of the Silver Jubilee of the Bayt Mal Al-Quds Asharif Agency. Composed of the Palestinian ambassador to the Kingdom of Morocco, Jamal Choubki, religious and academic figures, businessmen and civil society’s actors from Al-Quds and Gaza, the members of the delegation expressed their support for the territorial integrity and sovereignty of the Kingdom of Morocco, said the House of Representatives in a statement. They also reiterated their recognition and appreciation of the Kingdom’s initiatives in favor of the Palestinian cause, expressing their gratitude to His Majesty King Mohammed VI, Chairman of the Al-Quds Committee, for the Sovereign’s constant support for the Palestinian cause and for the pioneering roles played in this regard by the Bayt Mal Al-Quds Asharif Agency. The Bayt Mal Al-Quds Acharif Agency, which is celebrating its 25th anniversary, works to implement social projects in Al-Quds, thus contributing to the protection of the holy city, the preservation of its religious and civilizational heritage and the support of its inhabitants.