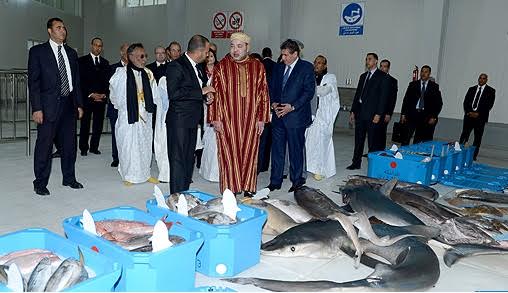 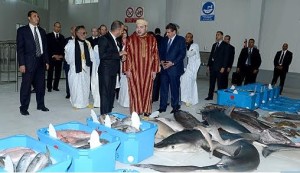 King Mohammed VI, who is currently touring the southern provinces, dedicated Monday at the port of Dakhla a new fish market and the “Oued Massa” seawater desalination vessel.

The new market, built part of the implementation of the “Halieutis” strategy, is meant to restructure the sector of small-scale coastal fishing in Morocco. The new market, covering 3,070 m2 and including state-of-the art infrastructures, required an investment of 26 million dirhams.

The Dutch-made vessel was purchased at the instruction of the King following the floods that hit the southern provinces in 2014. It will produce drinking water for the benefit of areas facing water shortage and lack of port infrastructure.

With a production capacity of 1,500 m3 per day, the new vessel can supply 20 liters of drinking water per day per person to 75,000 inhabitants.

Earlier in the day, the sovereign chaired the launching ceremony of the development programs of the Dakhla-Oued Ed-Dahab and the Guelmim-Oued Noun regions.

These two development programs fall within the framework of the implementation of the new development model of the southern provinces, launched by the Sovereign to mark the 40th anniversary of the Green March last November.

They are intended to ensure the final integration of these provinces in the unified homeland, and strengthen the Sahara as an economic center and as a link between Morocco and its African neighborhood.

The projects to be implemented between 2016 and 2021 in the Guelmim-Oued Noun region will require investments estimated at 11.93 billion dirhams, to which the State will contribute 5.5 billion dirhams.