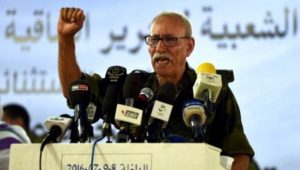 Brahim Ghali seeks desperately to take things in hand in the Tindouf camps, as evidenced by the first restructuring the Polisario chief operated within his team.

The restructuring started with the appointment Monday of Ali Sayed Bashir as “Minister of the Interior.” Ali Sayed Bashir is member of the Bouihates (Rguibates), a tribe which has been in the forefront of the opposition to the Polisario leadership over the past few years.

The new chief of the Polisario is determined to pull the rug from under the feet of Sahrawi dissidents, who ignited protests in the Tindouf camps before the death of his predecessor. With this in mind, he started reshuffling the cards among the apparatchiks of the separatist front.

The last two years of the rule of Mohamed Abdelaziz had, indeed, been marked by large-scale protests, despite the harsh repression the Polisario resorted to to quell the protests. The demonstrations were fueled by the worsening living conditions in the camps and the scandal of misappropriation of international humanitarian assistance. The embezzlement of the aid by officials of the Polisario, in connivance with Algerian officials, was revealed early 2015 by OLAF, the European Anti-Fraud Office.

Brahim Ghali’s eagerness to draw lessons from the mistakes of his predecessor prompted him to undertake the cards redistribution in favor of the Bouihates, said an informed source in the Tindouf camps. This is Brahim Ghali’s first decision since his appointment two months ago at the head of the Polisario.

This decision is understood in the camps as an attempt to appease the Bouihates, who have long been marginalized.

Meanwhile, the new leader of the Polisario tries to show firmness against Morocco, in line with Algeria’s position on the Sahara issue. Thus, the appointment of Mohamed Lamine el Bouhali as “commander of reserve regiment” sends a message in this respect to both Morocco and the hardliners within the Polisario.