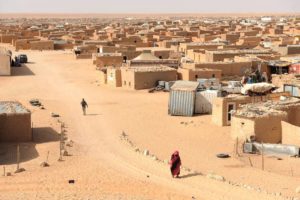 Morocco denounced, Tuesday in Geneva, Algeria’s refusal to authorize the “headcount and registration of the populations of the Tindouf camps,” exposing the Algerian regime’s manipulative ploy in the management of these camps to the detriment of the rights of the sequestered Sahrawi populations.

Algeria’s opposition to the census of the camps populations hinders their obtaining the refugee status that will grant them the right to voluntarily return to Morocco, or at least the right to choose freely their country of asylum. This opposition also confirms Algeria’s maneuvering to evade its international responsibility and the lack of interest it grants to the humanitarian tragedy of these populations, stressed a Moroccan diplomat in Geneva.

Addressing Tuesday the 71st session of the Standing Committee of the High Commissioner for Refugees (UNHCR), convened in Geneva March 6 to 8, the Chargé d’Affaires of the Moroccan representation, Hassan Boukili, said that Algeria has chosen to be in this situation of alleged host country of ‘Sahrawi refugees’ as it has itself created this situation.

For the diplomat, “Algeria’s repeated refusal to allow a headcount is a documented violation of the 1951 Geneva Convention, of the UNHCR’s mandate and of Security Council resolutions urging it to authorize this census”.

According to the Moroccan diplomat, the Algerian regime continues to hide the real number of this population “that would hardly exceed 20,000 to 25,000 people,” out of fear that the world discovers that Algerians and nationals of sub-Saharan neighboring countries were knowingly infiltrated among the Sahrawi population to inflate the number of refugees.

Algeria, which has for years taken advantage of the generosity of donors by inflating the number of refugees to 165,000, is now afraid to be held accountable for the misappropriation of humanitarian assistance and to be forced to reveal the authors of this misappropriation, the Moroccan diplomat underscored.