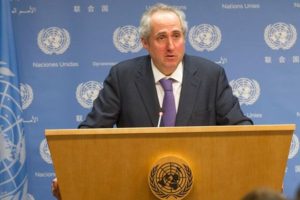 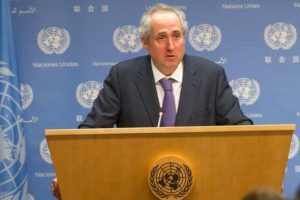 An armed militia of the Polisairo intercepted, on March 16 in the buffer zone of Tifariti near the Moroccan defense wall, a patrol of the blue helmets of the MINURSO (UN mission in the Sahara), and fired shots of summons, revealed Thursday a spokesman for the UN.

During his daily press briefing in New York on Thursday, UN spokesman Stephane Dujarric said that “MINURSO reported to the Security Council that on March 16, in the vicinity of Tifariti, MINURSO Military Observers on duty were stopped by armed Frente Polisario members, with shots fired in the air”.

It was only later that “the observers were allowed to resume their patrol” in the buffer zone of Tifariti, said the UN spokesman.

The same information was recently relayed by the media that specified that armed elements of the Polisario had been deployed in the buffer zone. Their mission?  Challenge the MINURSO military observers and erect signs warning of the presence of mined fields in an attempt to dissuade the blue helmets from accessing the area and noting the Polisario’s shenanigans in the demilitarized zone.

These provocative agitations are explained by the fact that the noose is tightening around the polisario in New York, Europe and Africa and by the refusal of MINURSO and its Chief, Colin Stewart, to meet the Polisario executives outside Rabbouni in Algerian territory, where such meetings have always been held and not elsewhere as desired by the separatists.

Moreover, Stéphane Dujarric did not omit to recall at the Thursday briefing that “since his arrival in late December 2017, the UN Secretary General’s Special Representative, Colin Stewart, has preferred to adhere to the longstanding practice of holding such meetings in Rabbouni, Algeria”.

Part of its Machiavellian approach, the Polisario has been trying, since last August, to transfer to Bir Lahlou its “civil and military structures” and to proclaim this town as the capital of its pseudo republic “SADR”, putting the UN before the fait accompli.

But that was without counting on the high degree of vigilance of both the UN and Morocco.