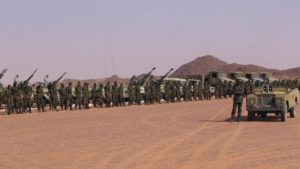 Morocco has complained to the Security Council and the UN Secretary General against the polisario violations and provocations in the Guerguarat buffer zone and in the east of the defense system in the Moroccan Sahara.

The complaint was backed up with proofs and photos, showing the polisario armed militias conducting on January 6th and 8th military maneuvers & combat exercises in Mheiriz. They also moved a so-called ‘administrative structure’ in this same area and deployed two military vehicles in the Guerguarat buffer zone.

These provocative acts constitute a “flagrant violation” of UN resolution 2414 adopted by the Security Council on April 27, 2018, ordering the Polisario to pullout immediately from the Guerguarat buffer zone and not to engage in destabilizing acts of relocation of administrative structures to the east of the defense system in the Moroccan Sahara”, said Mr. Hilale.

Morocco denounces the duplicity of the “polisario” which falsely claims a humanitarian crisis in the Tindouf camps, demanding an increase of humanitarian assistance, while it spent millions of dollars on military maneuvers. This should sound the alarm bell for the international community in general and donor countries in particular, added the Moroccan UN ambassador.

“By resorting to escalation and provocation, and by ignoring its commitments, the polisario seeks to torpedo the efforts of the UN Secretary-General and his Personal Envoy to relaunch the political process after the successful initial Geneva round-table (held 5-6 Dec.2018) and on the eve of the 2nd roundtable planned in the coming weeks “, he added.

The Moroccan ambassador warned the SG and the Security Council that the Kingdom of Morocco cannot tolerate the recurrence of such provocations that seriously threaten regional peace & security and undermine the efforts of the UN Secretary General and his Personal Envoy, calling them as well as the MINURSO to condemn these violations, demand the Polisario to stop these actions immediately and respect the resolutions of the Security Council.