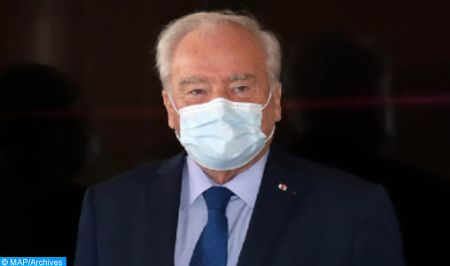 President of the France-Morocco Friendship Group in the Senate Christian Cambon welcomed, on Tuesday, the Kingdom’s “exemplary” management of the Covid-19 epidemic, saying that Morocco with “its good organization, sets an example for all of us”. He reiterated, on this occasion, France’s position of supporting the autonomy initiative in the Moroccan Sahara and lauded the French-Moroccan security cooperation which made it possible to thwart an attack south of France on Easter Day.

A meeting of the France-Morocco friendship group at the Senate and the House of Advisors was held today by videoconference from Paris and Rabat, under the co-chairmanship of Cambon and the first vice-speaker of the House of Advisors and president of the Morocco-France friendship group Abdessamad Kayouh. This meeting brought together a very large number of members of the two friendship groups who wished to demonstrate, by their presence, their strong will to continue working together despite the pandemic which prevented the holding of the usual meetings. The meeting was an opportunity to discuss a number of issues and tackle all the major cooperation issues at all levels.  “During this very meeting, we first discussed how our two countries have organized the fight against Covid, which gave me the opportunity to hail the exemplary management of Morocco which is fighting against the Covid with truly extraordinary and very positive vaccination figures,” Cambon told MAP. The two friendship groups agreed on the need to increase contacts after this pandemic, and to maintain and strengthen relations, notably in the scientific field at the level of researchers, laboratories and doctors “to be able to continue the vaccination effort which is being undertaken by our two countries, including towards our friends in Africa”, underlined Cambon. The meeting was also an opportunity to discuss developments in the Sahara issue in the light of the American recognition of Moroccan sovereignty.

“Our Moroccan friends recalled the position taken by the USA on the recognition of the sovereignty of Morocco. As far as I am concerned, I had the opportunity to recall France’s position in support of the autonomy proposal, a just, equitable and credible solution and a peaceful settlement under the aegis of the United Nations,” said Cambon. “We recall that the international situation obliges us all to seek ways of peace in the face of the development of terrorism in Africa and on all continents, including in Europe.

On this occasion, I welcomed the French-Moroccan cooperation which enabled us to arrest jihadists who were preparing to commit a new attack south of France on Easter Day”, added Cambon, who is also chairman of the Foreign Affairs and Defense Committee at the French Senate.