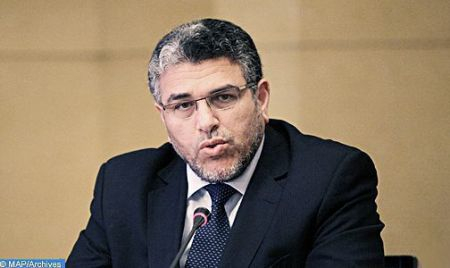 Spain has the obligation to respect the rights of Morocco insofar as the kingdom does, insisted, Tuesday, minister of State for Human Rights and Relations with Parliament, Mustapha Ramid. “The hosting by Spain of the leader of the polisario separatist militias, under a false identity, without taking into account good neighborly relations that require coordination and consultation, or at least informing Morocco, is an irresponsible and totally unacceptable act,” Ramid wrote in a post on his Facebook page. “What did Spain expect from Morocco when it hosted the leader of a gang that took up arms against it?”, “What would Spain have lost if it had consulted Morocco about hosting this individual?”, “Why has Spain not announced the presence on its soil of the individual in question in his true identity?”, “Is this not proof of its awareness that the act committed is contrary to good neighborly relations?”, “And if it was Morocco that committed this act?”, so many questions raised by Ramid. In this regard, he lamented that Spain has preferred its relationship with the separatist movement of polisario and its mentor Algeria to its relationship with Morocco that has sacrificed so much in the name of good neighborliness, which should rather be the subject of special attention from both neighbors and their constant concern to preserve it. Morocco is therefore in its full right to let Spain know the extent of its suffering in the name of this good neighborliness and that it will not accept any underestimation, so that it can review its policy and its relations with its neighbor and respect its rights as the kingdom does, wrote Ramid.