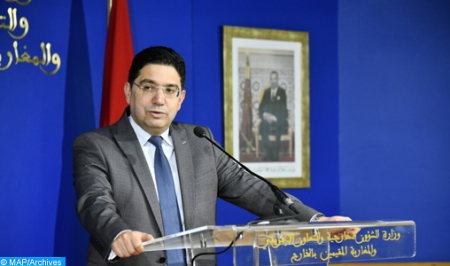 Spain is trying to use what happened in the occupied city of Sebta as a way to get out of the real debate on the Moroccan-Spanish crisis which is due to the hosting by Madrid of the so-called Brahim Ghali, although he is prosecuted for war crimes, crimes against humanity, rape and human rights violations, said the Minister of Foreign Affairs, African Cooperation and Moroccans Abroad, Nasser Bourita. “The efforts made by Morocco in the fight against illegal are well known”, Bourita told MAP, stressing that what happened in the occupied city of Sebta comes as a reminder of the cost that the Kingdom assumes to preserve the good neighbourliness. In the fight against illegal migration, “Morocco does not need to be graded by Spain nor its media”, he said, recalling, in this regard, that Morocco has foiled 13,000 irregular immigration attempts since 2017, dismantled 4,163 trafficking networks and recorded 48 assault attempts on Sebta. “There are figures which deserve recognition”, said Bourita, stressing that what happened in the occupied city also recalls “the financial cost which Morocco assumes for this good neighbourliness, that some have abused over the past days”. “Europe does not even give us 20% of the cost that Morocco assumes in the fight against illegal migration,” he said, adding that the events in the past few days have shown that 99% of the effort in the fight is being made by Morocco against “nothing on the other side”, affirmed Bourita, who rejected the accusations of blackmail of Spain against Morocco “which mobilizes its security forces and which pays from its budget to preserve its neighborhood”. “Morocco is not the gendarme, but it is always a responsible actor” in the fight against illegal migration, said the FM, stressing that the Kingdom is also entitled to demand the same responsibility, the same commitment and the same confidence from its partners. “Good neighbourliness and partnership are not slogans. We must embody them. Unfortunately what Morocco has received since April 17 is not proof of good neighbourliness or partnership. Today’s Morocco doesn’t accept that kind of double language anymore,” he said. Spain is making Europe pay the price for its clumsiness and must explain to Europe how an EU member country receives people with fake identities into European territory, Bourita pointed out. Madrid, he added, must also explain to its European peers how it can shelter in European territory someone who is being prosecuted for war crimes, crimes against humanity, rape and human rights violations and how a raped woman, who asks for her right, must wait for the two foreign ministers, Spanish and Algerian ones, to coordinate.