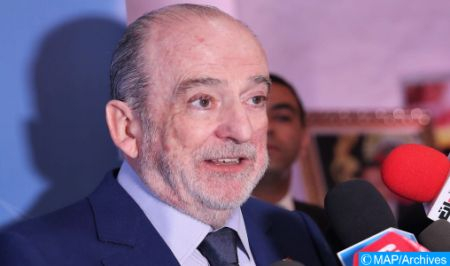 The decision of Spain to “roll out the red carpet (…) to the leader of the separatists, is a pure and simple offence made to Morocco”, underlined the President-Founder of the Crans Montana Forum, Jean-Paul Carteron, pointing out that the Iberian country, by this decision, has put itself “in a position that we can hardly understand”. “Today Spain, which has many other pressing concerns, has chosen to host the leader of the polisario, Algeria’s patented anti-Moroccan organization, for medical treatment. (…) This one is sued, even in Spain, for very serious crimes,” stressed Carteron in an analysis devoted to the diplomatic crisis set off between Morocco and Spain after the secret hosting and under a false identity of the so-called Brahim Ghali, in addition to the hostile attitude of the German diplomacy towards the territorial integrity of the Kingdom. “To roll out a red carpet for him, even for health reasons, is a pure offence against Morocco, whereas in Algiers there are certainly very efficient hospitals. Moreover, it would have been accepted that he used a false name and a false passport which would already legitimize an arrest, a criminal prosecution and a serious prison sentence for you or me!” he added. This is, he said, “a fine example of very ‘bad diplomacy’ – if one can still speak of diplomacy – and of complete dysfunction of the governmental machine. At best, moreover, because if it was deliberate, it would be a violent and definitive rupture of the relations of trust without which, in particular, security cooperation could no longer exist between the two countries”. He noted in this sense that Spain “has a vital need for its cooperation with Morocco in everything that affects its security, and on the other it openly offends it. So where is the logic? He wondered. “This example is not unique. Our world knows daily such situations and is put in danger by +diplomats+ who are in fact militants of lost causes”. “The Minister of Foreign Affairs, Mr. Nasser Bourita, has reacted strongly to this situation ubiquitous but serious. He is right. Today, we must vigorously demand respect, realism, honesty and transparency in international relations. We belong to a circle of friendship and trust or not,” he pointed out.  For the President and Founder of the Crans Montana Forum, “diplomacy is first of all, with courtesy and respect, to look after one’s own affairs, to abstain from interfering in those of others and especially to give lessons! Respecting the other in his specificities and sensitivities is the basis of a peaceful and constructive coexistence”.