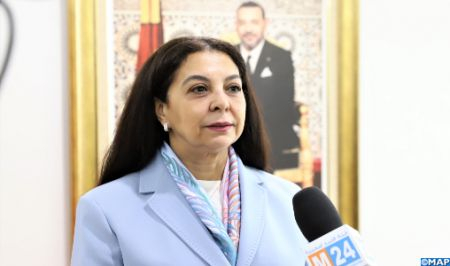 Moroccan Ambassador to Spain Karima Benyaich deplored, on Thursday, “the false facts” and “inappropriate remarks” made by the Spanish Foreign Minister. “The Spanish Foreign Minister has recently made statements to the press and at the Parliament, in which she continues to give false facts and make inappropriate remarks”, stressed Benyaich, adding that “we can only regret the lamentable nature, the agitation and the nervousness of her remarks”. In a statement to the press, the Moroccan diplomat also noted that the current crisis “revealed the real ulterior motives and intentions of certain parties in Spain who persist in wanting to undermine the higher interests of the Kingdom, since the recovery of the Moroccan Sahara in 1975”. “We are, therefore, entitled to wonder if these latest statements are a personal blunder of the minister, or if they reflect the real inclinations of certain Spanish parties against the territorial integrity of the Kingdom, a sacred cause for the Moroccan people and for all the living forces of the Nation”, she said. Benyaich asserted that “the mutual respect and trust between the two countries, to which the president of the Spanish government referred, are unfortunately questioned today”. “Morocco takes note of this and will act accordingly,” she concluded.