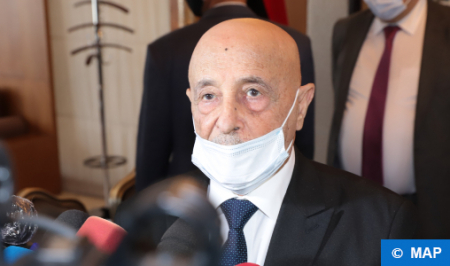 Libya still needs Morocco’s steadfast support for the achievement of security and stability in this Maghreb country, given the prominent place the Kingdom enjoys within the international community and the interest that HM King Mohammed VI takes in the Libyan issue, said on Thursday the speaker of the Libyan House of Representatives, Aguila Salah. In a statement to the press at his arrival at Rabat-Salé airport for a visit to the Kingdom, Salah stressed that Libya has succeeded, thanks to the efforts of brotherly countries, on top of which Morocco, to set up a single executive power, composed of a presidential council and a government of national unity, which has begun its mission. “We are awaiting preparations for the next elections set for December 24, 2021,” he said. He added that Libya has suffered heavily from the division especially during the previous period, reiterating the importance of building a democratic state, through transparent and honest elections, to allow the Libyan people to freely choose those who will govern them without any interference. Salah also expressed his deep gratitude to Morocco for its positions of permanent support to the Libyan people, noting that this visit, which takes place at the invitation of his counterpart Habib El Malki, is an opportunity to reaffirm the depth and solidity of fraternal relations linking the Moroccan and Libyan brotherly peoples. It also reflects the desire to strengthen contacts between the Libyan House of Representatives and its Moroccan counterpart to discuss issues of common interest, he said. For his part, El Malki said that Salah’s visit will allow to deepen the inter-Libyan dialogue, far from any interference, in accordance with the high instructions of HM King Mohammed VI, expressing the wish to see the process of consultations crowned by the building of a democratic State without any foreign intervention. He also said that the relations between the Kingdom of Morocco and the brotherly Libyan people are based on mutual trust.