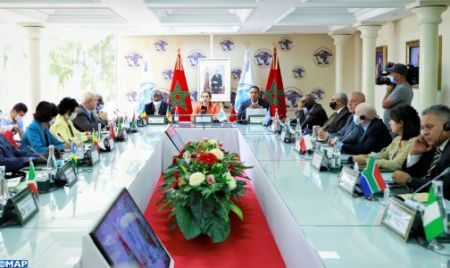 The Moroccan Association for Victims’ Rights (AMDV) met, on Wednesday in Rabat, with members of the diplomatic corps accredited to the Kingdom. This meeting was an opportunity for diplomats to learn about the action taken by the Association in defense of victims of sexual assault, by providing them with judicial, psychological and moral support. During this meeting, organized by the Diplomatic Foundation in Rabat, the Association, the first of its kind in Morocco, gave an overview of the reasons behind its creation, as well as the actions carried out by its members to defend victims of sexual assault of both sexes and from different age groups. The members of the diplomatic corps were also informed about the actions by the Association aiming at enabling victims to lodge their complaints and to initiate the judicial procedure, as well as to defend the independence of judiciary by fighting against impunity and all forms of politicization of common law cases. On this occasion, president of the Association Aicha Kelaâ said that this body was created following a debate that lasted more than two years between human rights activists and civil society actors on the lack existing at the legal and social levels in terms of protection of victims of sexual violence. The association aims to fight violations of the rights of victims, in addition to supporting them at the judicial level, by offering them psychological and moral support and fighting anything that can undermine their dignity, she said. According to Kelaâ, a lawyer at the bar of Casablanca, the AMDV aims to fill the legal gap and to advocate before the authorities for the updating of the legal system and its adaptation to international conventions on the subject. It also works to establish drop-in centers for victims to break the taboos on this type of crime, she said. Kelaâ also said that the association acts strongly against all forms of politicization of judicial files and all attempts to undermine the independence and integrity of the judicial system. She addressed in this regard the cases of Taoufik Bouachrine, Omar Radi and Souleimane Raissouni prosecuted in cases of common law including rape, indecent assault and human trafficking, while their defense try to politicize these purely legal cases to encourage impunity and undermine the reputation of the Moroccan state and the achievements made in human rights. There is also a manipulation by some foreign parties, in an attempt to pressure the judiciary and undermine the rule of law and institutions, she said. In this regard, the Secretary General of the Association, Mohamed El Haini, emphasized the independence of the Moroccan judiciary, noting that the Constitution of 2011 has enshrined the independence of judicial institutions. El Haini, a lawyer at the bar of Tetouan, noted that some journalists prosecuted in cases of common law, consider that their professional status gives them some judicial immunity, underlining that Moroccan citizens are equal before the law. He also noted that the victims of Bouachrine, Radi and Raissouni are the subject of a relentless attack by some parties, trying to undermine their dignity. For her part, Meryem Jamal Idrissi, in charge of judicial affairs at the Association, said that the independence of the judiciary and its collaboration with other powers is a modernist and progressive project that concerns the Moroccan society as a whole, noting that the association faces everything that can hinder justice. Jamal Idrissi, a lawyer at the bar of Casablanca, also said that the victim of sexual assault is generally not supported by her entourage, and suffers from the look of society, calling to ensure a fair trial to victims of this type of crime, especially when the accused is a known person or an agent of authority. This meeting, which was attended by 23 ambassadors and chargés d’affaires, was marked by a moving testimony of Sara El Mars, victim in the case of journalist Taoufik Bouachrine, who spoke of her material, psychological and social suffering following her sexual assault. She expressed her satisfaction with the creation of this association in order to provide the necessary moral support to victims of this kind of aggression. The Moroccan Association of Victims’ Rights (AMDV) held last April in Rabat, its constituent general assembly under the theme “For a legal and social protection of victims.” The association aims, according to its statutes, “to support the rights of victims of crimes, in accordance with relevant international conventions and constitutional and national bases, and to defend the rights of children, women and all vulnerable categories”, while working to make the voice of victims heard and to provide them with legal, psychological, health and social support, and to fight impunity, which is an infringement of the rights of victims and flouts the principle of equality of citizens before the law.