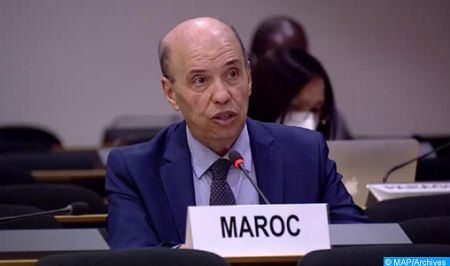 Morocco’s Ambassador and Permanent Representative to the United Nations Office in Geneva, Omar Zniber, recalled on Wednesday, during the debates held in the framework of the 47th session of the Human Rights Council, the direct responsibility of Algeria in the persistence of the ordeal endured by the populations of the Tindouf camps, deprived of their most basic rights, and used by the authorities of this country as a business. The ambassador also drew attention to the serious violence and inhuman and degrading practices perpetrated by the Algerian authorities against migrants, especially sub-Saharan migrants, as evidenced by the reports of several international organizations. Speaking at the Interactive Dialogue with the Special Rapporteur on the right to adequate housing, Zniber noted that it is time to question the Algerian authorities on the fact that they have kept the population in the camps of Tindouf for 45 years, without having been able to provide the minimum conditions of housing, leaving them in vulnerability and precariousness, while the totality of this population constitutes the equivalent of a few blocks of a neighborhood of the capital of this country. “The funding to arm the separatists who control these camps could have been enough to build housing, not only for this population, under the control of the Algerian authorities, but also to provide all citizens of this country with adequate housing,” he said. It is unfortunate, noted the ambassador, that the Algerian authorities continue to make the humanitarian quest, often embezzled to the detriment of the populations of the camps of Tindouf. Faced with its unmistakable realities, this situation fully deserves a follow-up by the relevant procedures, he said. In another interactive dialogue with the special rapporteur on migrants, the Moroccan delegation drew attention to the fact that the Algerian authorities, in a systemic practice, have expelled thousands of migrants and asylum seekers from sub-Saharan Africa. Algerian security forces have separated children from their families in mass arrests, stripped adults of their possessions, prevented them from contesting their expulsion, and refused to verify their eligibility for refugee status, the Moroccan delegation recalled. Algeria had expelled 35,600 migrants, many of whom had resided in Algeria for many years, according to figures by the International Organization for Migration (IOM). Similarly, the Human Rights Commission called on Algeria to refrain from collective arrests of migrants and asylum seekers and to refrain from arbitrary detention, ensuring that migrants have access to a lawyer and information on their rights. Zniber noted, moreover, that it is distressing to note that instead of providing adequate responses to the many questions on the dramatic situation of the population held in the camps of Tindouf, and their deplorable state of poor housing, and on the violations of the rights of migrants, the representative of Algeria “persists in his campaign of harassment and hostility in which his delegation is engaged, in disregard of the objectives and the serenity of our discussions.” “It is even more deplorable to note that the delegation of Algeria, during the work of this session, limits its efforts, without result, to attacking Morocco and its territorial integrity, in disrespect of our agenda,” said the ambassador. Rejecting categorically the statements of the representative of Algeria on the policy and migration strategy of the Kingdom of Morocco, Zniber noted that this strategy is in fact a model recognized by the world, especially by the most competent international institutions such as the UNHCR, which has just declared Morocco as a “reference country” on the international scene in terms of hosting refugees and asylum management, in a statement dated June 18.