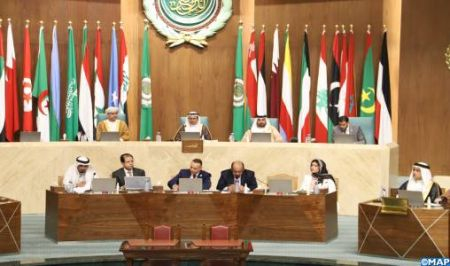 The Arab Parliament reiterated Saturday its categorical rejection of the European Parliament’s resolution on Morocco, stressing that this decision with what it entails as criticism and unfounded accusations, constitutes a provocation and an unacceptable politicization of the efforts made by the Kingdom to fight illegal immigration. In a decision adopted at the end of its emergency meeting, held Saturday in Cairo, the Arab Parliament denounced the interference of the European Parliament and its insistence on getting involved in a bilateral crisis between the Kingdoms of Morocco and Spain, which can be resolved through diplomatic means and direct bilateral negotiations between the two countries. It also praised the tireless efforts made by the Kingdom of Morocco in the fight against illegal immigration, which stems from a strong political will and the High Directions of HM King Mohammed VI, as leader of the African Union on the issue of migration. In this regard, the decision highlighted that the organization in December 2018 by Morocco of the international conference that adopted the Global Compact for Safe, Orderly and Regular Migration, as well as the hosting by the Kingdom of the headquarters of the African Migration Observatory in December 2020 and the adoption of the African Agenda for Migration at the initiative of HM the King “are all facts that confirm the national, regional and international efforts made by the Kingdom of Morocco in the field of migration and refute at the same time the false allegations contained in the European Parliament resolution”. The Arab parliament also stressed the need to look into the issue of the Moroccan cities of Ceuta and Melilla and the occupied Moroccan islands, in order to settle this situation that is part of the colonial era. While reaffirming its firm and constant solidarity with Morocco, the Arab Parliament instructed its resident to take the measures he deems appropriate to support the Kingdom against the European resolution. The Arab Parliament also expressed its categorical rejection of “the unacceptable arrogant approach of the European Parliament in dealing with issues related to the Arab countries, adopting resolutions that are at odds with the requirements of the desired strategic partnership between the Arab and European countries”. It called on the European Parliament to abandon these provocative practices and adopt practical and responsible positions that strengthen cooperation and joint coordination between the Arab and European countries, emphasizing the need to develop a unified and integrated Arab action plan to address these irresponsible positions of the European Parliament and to ensure respect for the sovereignty of Arab countries and non-interference in their affairs. The Arab Parliament also urged the Inter-Parliamentary Union, the Mediterranean Parliament, the Parliamentary Assembly of the Union for the Mediterranean and all regional parliaments to reject and condemn this decision, which contradicts the internationally recognized rules of parliamentary diplomacy.