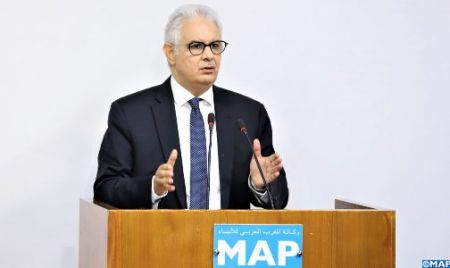 The future government will face major challenges related to the room for maneuver and the social situation, said Wednesday in Rabat, Secretary General of the Istiqlal Party (PI), Nizar Baraka. For Baraka, who was the guest of the MAP Forum on the theme “the Istiqlal Party facing the challenges of the national political and partisan landscape”, the future government will face great challenges given that “the room for maneuver is reduced because of the repercussions of the Covid-19 pandemic, the fragile social situation and the crisis of confidence”. He noted that the situation is not easy and requires responsibility, courage and a vision of the future as well as the ability to concretize this concept on the ground, with the support of all actors in its implementation, expressing the hope that the upcoming elections will result in the formation of a strong and harmonious government on the basis of a collective project. Baraka also said that his party is ready to make the necessary break with the practices of the past, emphasizing the need to break with the society of rent and privileges and build the one of human rights, in order to release the great potential of Morocco, revive the hopes of citizens, improve their social and economic situation and allow the country to overcome some pitfalls. In this regard, the Secretary General of the PI called for an end to the policy of privileges granted to certain categories and defense of the interests of lobbies instead of those of citizens, while working to reduce social disparities, noting in this sense the need to fight poverty and the expansion of the middle class, through the development of a specific policy. Regarding the elections of 2021, he said that experiences have shown that pre-election alliances are not often respected, noting that the alliance with the parties of the opposition remains possible provided that it respects the spirit of the program that “we present”, based on the break with the practices of the past.