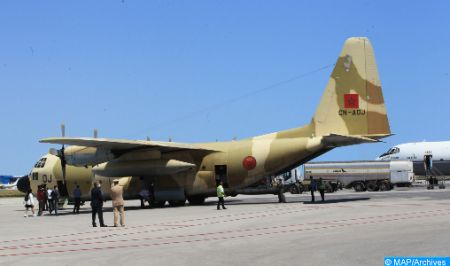 Four planes of the Royal Air Force landed Monday morning at Tunis-Carthage international airport as part of the airlift carrying emergency medical aid ordered by HM King Mohammed VI for Tunisia, which is experiencing a worsening of its epidemiological situation linked to Covid-19. The total number of Royal Air Force aircraft that have arrived in Tunis so far has reached 12 carrying 134 tons and 689 kilograms of aid. The medical aid ordered by His Majesty the King consists of two complete and autonomous resuscitation units with a total capacity of 100 beds. It also includes 100 respirators and two oxygen generators with a capacity of 33 m3/hour each. This Royal decision falls within the framework of the ties of active solidarity between the Kingdom of Morocco and the Republic of Tunisia, as well as the genuine fraternity that unites the two brotherly peoples.