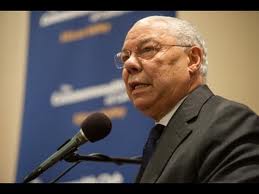 Former US Secretary of State, General Colin Powell, would be getting ready to succeed the personal envoy of the UN Secretary-General for the Sahara, Christopher Ross. According to information filtering through the UN corridors, Ban Ki-moon will announce Colin Powell’s appointment to the position before the end of the UN General assembly scheduled for early September.
The peace negotiations were already at a standstill as each of the two parties to the conflict, Morocco and the Polisario, was sticking to its own positions. Morocco’s decision to withdraw its confidence from Christopher Ross, for his partiality and stands deemed favorable to the opponent party, led the whole talks process, seeking a negotiated settlement to the Western Sahara conflict, to a quasi-total deadlock.
The UN Secretary General, who hastily renewed his confidence in his personal envoy for the Sahara, eventually realized that he could not impose an envoy that is rejected for one reason or other by one of the two conflicting parties, a western diplomat based in New York said under cover of anonymity.

According to the diplomat, the representative of the Polisario insistently requested Ban Ki-moon to find someone to replace Christopher Ross the soonest possible to unlock the impasse which does not benefit the Sahrawis’ cause.
According to several diplomats accredited to the UNO, the former US Secretary of State, Colin Powell, would suit both parties to the conflict. Therefore, his appointment as personal envoy of the UN Secretary General should apparently raise no problem, the diplomats said.