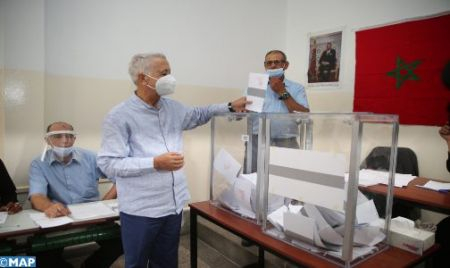 Morocco has made exceptional efforts at all levels to hold legislative, regional and communal elections, despite the constraints related to the Covid-19 pandemic, said, Wednesday in Casablanca, Secretary General of the Constitutional Union (UC), Mohamed Sajid. After performing his national duty in a polling station in the economic capital, Sajid stressed that this is an essential democratic step, noting that the Kingdom was able to hold this constitutional appointment in its time despite the constraints related to the pandemic and its negative impact. He added that Morocco, very committed to the democratic process, has made exceptional efforts at all levels to organize these elections, praising all those who have ensured the success of the electoral process. In the same vein, Sajid emphasized the importance of the adherence of citizens to succeed in the elections, by flocking in numbers on the polling stations to perform their constitutional duty. The city of Casablanca, which has 16 districts spread over 8 prefectures, leads the Moroccan cities in terms of polling stations, electoral districts and number of voters and candidates.