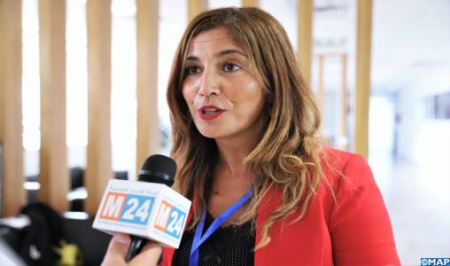 International observers spread in the various regions of the Kingdom during the elections of September 8 welcomed, on Thursday, the good conduct of these elections as well as their organization. Speaking to MAP on the occasion of the presentation of the report of the National Human Rights Council on the preliminary observations regarding the September 8 elections, several international observers underlined that the voting operations took place in good conditions, highlighting the high voter turnout recorded in the southern provinces as soon as the polling stations opened. “The fairness in the treatment of the candidates was respected, the representatives of the various political parties were mobilized in the polling stations in a rather systematic way, with a significant representativeness of young people aged less than 25 years within the various parties”, said the representative of the Cercle Eugene Delacroix, Ms. Khadija Gamraoui. The head of the observer mission of this association that brings together several French elected officials stressed the mobilization of voters for this triple ballot, with a very high turnout in the southern provinces as soon as the polling stations opened, which testifies to the confidence that the people of these provinces grant to the political process and representative institutions. In his turn, “Dynamique Maroc” Association, Driss Ettazaoui, said, on behalf of the 12 observers representing this body made up of French elected officials, that the legislative elections took place in “total transparency”. “The organization of this electoral ballot was of high quality”, he pointed out, stressing that “the Kingdom of Morocco has nothing to envy to other countries in terms of organization of exemplary elections”. For his part, the president of the National Audiovisual Regulatory Council of Senegal (CNRA), Babacar Diagne, welcomed “the transparency and the very good organization” of these elections. “We have not observed any incident likely to undermine the integrity of the electoral operation, we are very satisfied with the transparency of these elections,” said Diagne. Morocco has taken up the great challenge of organizing three elections on the same day despite the exceptional circumstances linked to the COVID-19 pandemic, noted the director of Gender Concerns International, Sabra Bano, who thanked the authorities for facilitating the mission of the international observers. “We have observed with satisfaction the strengthening of the political representativeness of women,” noted Ms. Sabra Bano, assuring that all guarantees have been met for the organization of “free and transparent” elections.