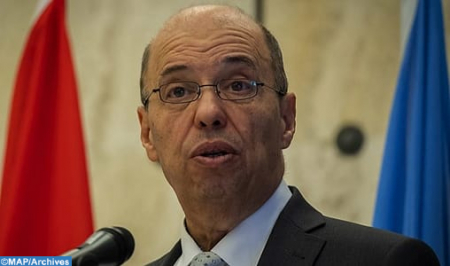 The Moroccan Sahara region is experiencing remarkable growth at the economic, social, cultural and diplomatic levels as well as in terms of participation in the consolidation of the democratic process in the Kingdom, underlined the Ambassador of Morocco in Geneva, Omar Zniber, who denounced the baseless allegations of Algeria on the situation in the Kingdom’s southern provinces. Speaking during the 48th session of the UN Human Rights Council, Mr. Zniber highlighted the growth dynamic experienced by the Moroccan Sahara region, thanks to a global development strategy aiming at the promotion and the strengthening of the economic, political and social rights of the local population, and achieving their aspirations within the framework of national unity. Using the right of reply to the baseless allegations of Algeria’s representative, the diplomat noted that the Sahara region, once an arid desert, has today become a real economic hub with the most modern infrastructure in the different areas: ports, airports, hospitals and universities, in addition to a dynamic and diversified economy. “Regarding ​​political and civil rights, the last elections held on September 8 provided further proof of the unwavering support of the local population to the democratic process and national institutions,” he pointed out. “In Morocco’s southern provinces, the participation of citizens in the elections was, as usual, strong, which constitutes irrefutable proof of the attachment of the citizens in these provinces to their Moroccan identity and of their effective involvement in the country’s institutions and in the development of the democratic process,” he stressed, noting that Morocco’s democratic model is recognized and praised internationally. He noted that, “on the other side of the borders, the Algerian regime keeps the populations of Tindouf in camps where they are deprived of their most basic rights”. The ambassador underlined in this regard that “there has never been, neither in history nor in reality, a people known as the population of Western Sahara so that the right to self-determination can be applied by misappropriation of a noble principle which is thus exploited and instrumentalised for hegemonic ends against the territorial integrity of Morocco – which is also a fundamental principle of the United Nations -“. Algerian leaders, he said, as it is today documented and recognized at the global level, did not hesitate to officially propose to the United Nations to divide the populations of the Sahara just to satisfy their ambitions to create an entity allowing this regime, not only to destabilize Morocco, but also the whole region to fulfill its objective of having access to the Atlantic. “These are the truths which constitute a flagrant violation by the Algerian regime of Human Rights”, he said, noting that “it is this same regime which allowed itself in 1975 to expel tens of thousands of Moroccan families from its territory, separating children and parents as evidenced by inhuman testimonies, all this in response to the Green March which led to the liberation of Moroccan territories and to agreements between Morocco and the former colonial power – Spain – as attested by the documents accessible to all and duly registered by the United Nations”. “These are the same rulers who have been closing borders with Morocco since 1994, once again without any valid justification, none other than wanting to harm and hinder the economic and social development and the stability by which Morocco is distinguished”, he pointed out. During this session, Zniber, who presented the Declaration of Morocco, gave an overview of the progress and achievements made by the Kingdom in the promotion of human rights at the national and international level. He stressed that Morocco continues to manage successfully an efficient response to the Covid-19 pandemic by opting for anticipation in the mitigation of its social and economic impacts and early engagement in vaccination. The diplomat noted that Morocco has given, once again, the living example of its ability to meet major challenges, by consolidating its democratic institutions, through the organization, on September 8, of general elections, having led to a democratic alternation, with a very active participation of the populations and having in particular also reached very high voter turnouts in the provinces of the Moroccan Sahara. Morocco, in cooperation with the General Secretariat of the United Nations and the decision of the member states, opened last June in Rabat, the United Nations Office for Counter-Terrorism and Training in Africa. This office will focus on capacity building and skills development in the fight against terrorism, radicalization and extremism, he recalled.