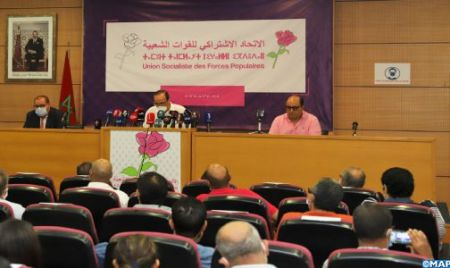 The National Council of the Socialist Union of Popular Forces (USFP) said it is in favor of participating in the next government if the party “receives a suitable offer that is in line with the ambition to form a united, homogeneous and strong cabinet”. In a statement issued at the end of its session held Sunday, the National Council, “expressing a legitimate ambition to be part of the next government, affirms to respect the choices of the head of the government-designate, responsible for forming it”. The Council also expresses “the willingness of the USFP to serve the country from any position that allows it to accompany the new stage,” added the statement. In addition, the National Council of the USFP has mandated the leadership of the party to manage the next stage, as regards the position of the party in the new political map as well as the orientation it should adopt, in harmony with its political and ideological ideals and with the choice +Morocco first: a new alternation with a social and democratic horizon+”.