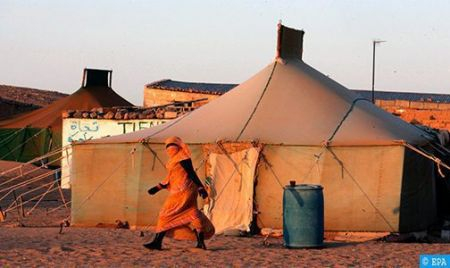 The Sahrawi human rights defender and former prisoner in the jails of the polisario, Fadel Breika, denounced Monday in Geneva the climate of terror, intimidation and repression in the camps of the polisario separatists in Tindouf, urging the international community to put pressure on Algeria to end the state of lawlessness in the camps. Speaking during a dialogue with the Working Group on Arbitrary Detention, as part of the 48th session of the Human Rights Council, Breika emphasized the full responsibility of Algeria in the serious abuses, abductions and torture practices committed by the armed militia of the polisario, against opponents and critical voices of the separatists’ leadership in the Tindouf camps. He said that he shared the conclusions of the report of the Working Group on Arbitrary Detention and its concerns “about the intensification of arbitrary detention practices aimed at suppressing freedom of opinion and expression, particularly by armed groups that impose their law by force and violence with the support of their state mentors, like the polisario militias who resort to kidnapping and torture in detention centers on Algerian soil, including the sinister prisons of Errachid and Dhaybiya, where hundreds of Sahrawi opponents of the separatists’ leadership have been killed”. Abductions and arbitrary detentions in the Sahrawi camps in southern Algeria has intensified since the polisario militias violated the ceasefire agreement, he noted, adding that any Sahrawi who refuses to join these militias is arrested and imprisoned in full view of the Algerian authorities, who have turned these camps into a lawless area. He denounced, in this regard, the impunity enjoyed by the leaders of the polisario and the Algerian army who deprive the victims of all means to claim their right or to resort to justice, in flagrant disregard of international law and international obligations of Algeria. “Therefore, we ask the working group to include the Tindouf camps in southern Algeria in its programs of visits,” he said, calling on “the international community to put pressure on Algeria to put an end to the state of lawlessness that prevails in the camps,” and to stop the practices of arbitrary detention and kidnapping of opponents.