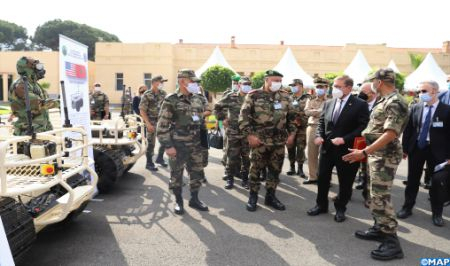 The Royal Armed Forces (FAR) are now regional leaders in the fight against Chemical, Biological, Radiological and Nuclear (CBRN) threats, said Monday in Kenitra, U.S. diplomats, recognizing the professionalism of the CBRN Intervention Company under the Rescue and Salvage Unit (USS) of FAR as “full mission-capable”. FAR USS CBRN Response Company in Kenitra stood out during a ceremony marking the completion of a six-year program that focused, in collaboration with the United States, on CBRN threats. Some 40 members of the unit, including female personnel, have been awarded U.S. certificates of readiness and recognition, becoming “fully capable” of carrying out CBRN threat missions. The US$16 million Cooperation Program, initiated by the U.S. Defense Threat Reduction Agency (DTRA), helped train FAR CBRN Company in the detection, identification and securing of chemical, biological, radiological and nuclear hazards, using the most advanced equipment available. During this ceremony chaired by Brigadier General Abdeljalil Ennafaa, Inspector of the Army of Engineers, and attended by the Chargé d’Affaires to the U.S. Embassy in Rabat David Greene, as well as other diplomatic and military personalities, Captain Yassine El Khadiri, Commanding Officer of the CBRN Company of FAR USS, presented the film of the training program, which spanned from 2014 to 2021. In this regard, he listed the different stages of the training and exercises carried out, as well as the material and equipment used. The Moroccan and American delegations, after having been informed on the course of the formations of this Company of FAR USS, reviewed the equipment, the material and the logistic means used in the operations of intervention to face the CBRN threats. Explanations, in this sense, were provided to the guests by the team leaders of CBRN Company, on the modus operandi of the interventions. The soldiers of CBRN Company were able to demonstrate during this presentation a real know-how in the field and an undeniable predisposition for an operational response. “The relationship between the United States and Morocco is becoming stronger, and our outstanding military relationship has only grown stronger in recent weeks and months, thanks to joint training programs like this one,” Greene told reporters on the sidelines of the ceremony. “FAR are able to deploy rapidly within Morocco and across the region to deal with these types of threats, including the proliferation of weapons of mass destruction, industrial accidents and natural disasters,” said the Chargé d’Affaires at the U.S. Embassy in Rabat, adding that he was “proud” of this bilateral cooperation aimed at strengthening the capabilities of FAR. “This activity is just one part of the strong cooperation linking the two countries on all levels, including security in Morocco, the region and the world,” he said. For his part, Captain El Khadiri said in a similar statement that FAR have entities specialized in CBRN protection with more technologically advanced means, adding that the rise of the CBRN Company has been completed following a close partnership with the DTRA Agency, spread over six years. “This Agency has participated in training and equipment support especially in the field of recognition, personal protection, detection and identification of CBRN agents, sampling and decontamination,” he said, stating that this partnership is a great added value for FAR which is part of the continuity of the efforts of the Command to optimize an effective and safe response to threats of this kind with specialized teams. In addition to the CBRN Company, FAR USS also includes four other entities specialized in rescue and debris removal, rescue and flooding, firefighting, and explosive ordnance disposal (EOD). FAR CBRN Company will continue to partner with U.S. agencies, including the UTAH National Guard Partnership Program, NATO, and other African countries such as Senegal and Kenya that have both completed the Counter-Weapons of Mass Destruction Security Cooperation Program. FAR and the U.S. Army have concluded this week a major disaster planning exercise, coupled with a four-week training program on blast risk management, said Thursday the U.S. Embassy in Rabat, stressing the “continued strength” of the military partnership linking Morocco and the United States.