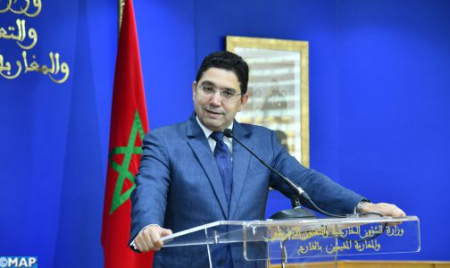 France’s decision to tighten visa requirements for Moroccan nationals is unjustified and does not reflect the reality of consular cooperation in the fight against illegal immigration, underlined, Tuesday in Rabat, the Minister of Foreign Affairs, African Cooperation and Moroccans Abroad, Nasser Bourita. “We have taken note of this decision and consider it unjustified for several reasons, the first of which is that Morocco has always treated the issue of migration with the logic of responsibility and the necessary balance between the facilitation of the movement of people (Students, businessmen and others …), the fight against illegal immigration and the firm treatment reserved for people in an irregular situation”, said Bourita at a press conference following talks with his Mauritanian counterpart, Ismaël Ould Cheikh Ahmed. As part of this approach, Morocco acts responsibly, said Bourita, specifying that all requests made by the French authorities in this regard have been processed. The minister said in this regard that 461 passes were issued to people who were in an irregular situation and that 128 of them were admitted, stating that Morocco conditions the return of its nationals to the fact that they have a passport or a pass, and in the wake of the pandemic of covid-19, the Kingdom requires in addition a negative PCR test to access the national territory. What France does not say, he noted, is that some individuals with travel documents have not been able to return to Morocco because they refuse to perform this test, which is optional in France, describing as “inappropriate” the adoption of the parameter of refusal of the issuance of consular declarations necessary for the return of emigrants. This is a purely French problem because if French law does not allow its authorities to force emigrants to submit to this test for their repatriation, Morocco will not agree to change its laws to allow people coming from France to access its territory without being tested, he explained. However, the decision of France remains sovereign but the reasons which motivate it require precision and debate, because it does not reflect the reality of consular cooperation between the two countries in the fight against illegal immigration, said the minister, adding that Morocco will closely follow this decision. While pointing out that the French decision was taken without any prior consultation or information from Morocco, Bourita stressed that the management of the migration issue must be immune to internal political contexts and should not be subject to political and electoral circumstances.