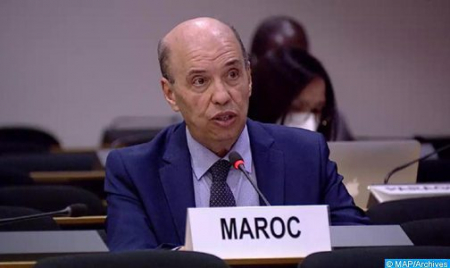 Morocco chaired, Monday in Geneva, the 18th meeting of States Parties to the Convention against Torture and Other Cruel, Inhuman or Degrading Treatment or Punishment (CAT). On this occasion, Permanent Representative of Morocco in Geneva, ambassador Omar Zniber, highlighted the strategic and irreversible commitment of Morocco to the protection and promotion of human rights, illustrated, among other things, by the interaction in the Kingdom with the international system of promotion and protection of human rights. Morocco, Zniber recalled, is party to almost all the major human rights instruments and submits its initial and periodic national reports on an ongoing basis, in accordance with the obligations arising from its accession to these instruments. In this sense, he placed particular emphasis on the role of Morocco, its commitment to issues of combating torture, stressing the substantial contributions of the Kingdom to the bodies concerned, including its action in the framework of the Initiative of the Convention against Torture, allowing the accession of all Arab countries to the Convention.