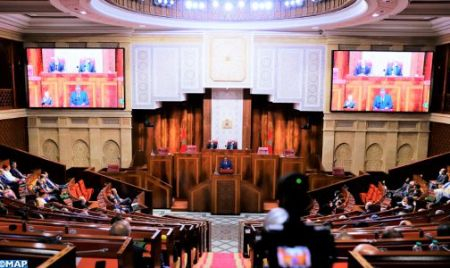 The head of government, Aziz Akhannouch, presented, Monday, the main lines of the government program, during a plenary session held by both Houses of Parliament, in accordance with the provisions of Article 88 of the Constitution. During this plenary session, chaired by speakers of the House of Representatives and the House of Advisors, respectively Rachid Talbi Alami and Naam Miyara, the Head of Government emphasized the key aspects of the governmental program, including the successful exit from the crisis related to the Covid-19 pandemic, the consolidation of the democratic choice and the strengthening of its mechanisms, as well as the commitment to implementing the content of the new development model. Akhannouch also mentioned the guiding principles of the government program, as well as the ten commitments of the government during the period 2021-2026, while referring to the priorities on which the Executive will have to focus, namely the strengthening of the pillars of the social state, the stimulation of the national economy for the benefit of employment, the enshrining of good governance in public management, as well as the establishment of a strong cooperation relationship between the Executive and the legislative bodies. The government program, he added, provides realistic and ambitious responses to get out of the crisis and project into the future with determination and consistency, through adopting a battery of measures to implement the new development model and actions to be taken contained in the programs of the parties forming the government majority, in order to provide an explicit response to the priorities of citizens. Akhannouch said that the government program draws its spirit and philosophy from the Royal High Directions and overlaps with the content of the new development model of the Kingdom. It is, according to him, a project that draws its source in the constant values of the Kingdom, its historical wealth, the vitality of its culture, the diversity of its identity and the multiplicity of its capabilities, thus exploring the prospects of integrated and sustainable development. Article 88 of the Constitution stipulates that after the King has appointed the members of the Government, the Head of Government shall present and explain before the two Houses of Parliament together, the program that he intends to implement. This program must set out the guidelines for the action that the government intends to take in the various sectors of national activity and, in particular, in the fields of economic, social, environmental, cultural and foreign policy.