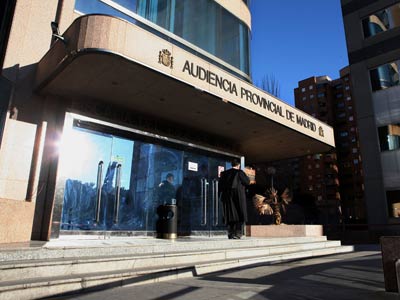 The unprecedented trial of the Polisario torturers for crimes and genocide opened Monday before the Audienca Nacional, Spain’s highest criminal court.
The first victims of serious violations of human rights and crimes committed by some leaders of the Polisario separatist movement were heard in Madrid by prominent judge Pablo Rafael Ruz Gutierrez of the Audiencia Nacional.
Two of these Sahrawi victims, Dahi Aguai, president of the Association of missing people at the hands of the Polisario, and Mrs. Saâdani Malainine, have thus made before Judge Pablo Ruz damning accounts of the atrocities committed in the Tindouf camps and the sufferings they were inflicted at the orders of the Polisario and under the passive watch of Algerian authorities.
The two victims also described the inhuman living conditions in Tindouf and the degrading practices and abuses they were subjected to and that are still affecting them.
“We have told the judge about the serious human rights violations we have experienced for years in the Tindouf camps,” Dahi Aguai told the press after the hearing.
For her part, Mrs. Saâdani Malainine, who had been deported to Cuba while she was just 5 year old, described the opening of the trial as “a historic day” for all the victims of the Polisario.
She said she revealed to the judge the abuses inflicted on her family in Tindouf and told her how her late father, El Wali Sheikh Slama, had been tortured under her own eyes, by Sid Ahmed Batal, the so called Minister of Information of the ghostly Sahrawi republic “SADR”.
“We just want justice to be served. The defendants in this case should be held accountable for the serious crimes they committed against thousands of innocent victims,” she insisted. The victims fully trust the justice of a “democratic country” such as Spain to bring the truth eventually to light, she said.
Judge Pablo Ruz also heard Mustapha El Kouri as a witness. He supported the two plaintiffs’ testimony.
The Audienca Nacional judge had asked the Spanish police to locate the 29 persons cited in the complaint and to hand them the summons. The defendants are to appear before the court on August 16.