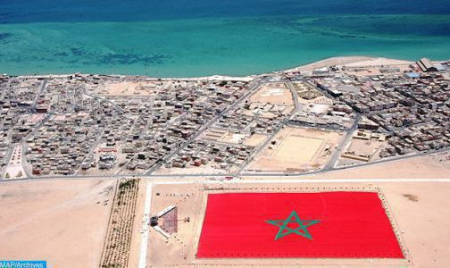 The Republic of Guinea welcomed, Monday in New York, Morocco’s “serious” efforts in the search for a realistic, political and compromise-based solution to the regional dispute over the Sahara. “It must be recognized that the Kingdom of Morocco has made serious efforts within the framework of its autonomy initiative, in particular by undertaking institutional and economic reforms aimed at promoting human rights and development in the southern provinces,” said the representative of the Republic of Guinea before the members of the 4th Committee of the General Assembly of the United Nations. He also underlined that the Moroccan autonomy initiative is “a compromise solution” in accordance with international law and the resolutions of the General Assembly and the Security Council. “The full respect of the ceasefire in the Sahara and the participation last August of elected representatives of the Moroccan Sahara in the regional seminars of the United Nations Committee of 24, as well as in the two previous round tables in Geneva are a perfect illustration of the good faith of the Kingdom of Morocco,” he pointed out. He stressed that the “issue of the Moroccan Sahara is of capital importance for all peace and security-loving states such as the Republic of Guinea which considers that the stability of the region depends in many respects on a peaceful settlement of this conflict.” The speaker reiterated, in this regard, his country’s “pressing” appeal to all parties to the conflict to fully engage in a spirit of realism and compromise, in order to achieve a realistic, pragmatic and sustainable solution. “The Republic of Guinea remains convinced that the solution to the Moroccan Sahara issue cannot be found without inclusive dialogue and respect by the parties of their commitments,” said the diplomat, who congratulated the UN Secretary General for the “new dynamic that he continues to inject into the peace process initiated by its predecessors.” He also welcomed the appointment of Mr. Staffan de Mistura as the new Personal Envoy of the UN Chief for the Sahara. The diplomat highlighted the importance of the holding of the two previous round tables in Geneva, which brought together all the stakeholders, in particular Algeria, Morocco, Mauritania and the “polisario”, in accordance with the resolutions of the Security Council in general and Resolution 2548 in particular, adopted on October 30, 2020. The representative of the Republic of Guinea also congratulated Morocco on the holding, on September 8, 2021, of general legislative, communal and regional elections throughout its national territory, including in the Sahara, which is were held in a “climate of peace” with a high voter turnout of the population of the Moroccan Sahara.