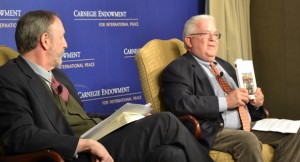 There are only two options for a final settlement of the Western Sahara conflict: the Morocco-proposed initiative to grant a large autonomy to the disputed territory or the self-determination referendum upheld by the Polisario and its mentor, Algeria.
However, the second option, as explained by the Carnegie Endowment for International Peace, has been deemed for years “unrealistic” and became over time obsolete.
In a recent research paper entitled ” Western Sahara: Beyond Complacency”, the Washington-based think tank recalled that former UN Secretary General Javier Perez de Cuellar had said “I was never convinced that independence promised the best future for the inhabitants of the Western Sahara.”
The fifth Secretary-General of the United Nations wrote in his memoirs in 2006 that the territory offers meagre prospects of viability as a separate country. “Such political leadership as exists is not impressive and in some cases is not Sahrawi in origin,” he wrote, alluding to puppets manipulated by the Algerian government that continues to claim, on behalf of the Polisario, the organization of a self-determination referendum.
The only realistic solution, De Cuellar added, is for the Western Sahara to be integrated as an autonomous structure within Morocco.
The same diagnostic was made by Javier De Cuellar’s successor, Boutros Boutros-Ghali, who admitted that a referendum on self-determination could never happen.
Erik Jensen, UN undersecretary-general and head of MINURSO (1994 to 1998), Bernard Miyet, former United Nations under-secretary- general for peace-keeping operations (1997- 2000), and Peter Van Walsum, personal envoy of the UN secretary-general for the Western Sahara (2005-2008), all reached the same conclusion, the author of the research paper, Anouar Boukhars, pointed out.
The paper also quoted Algerian retired general, Khaled Nezzar, once a staunch defender of independence, who said in 2003 that “the last thing that North Africa needs is more fragmentation.”
Anouar Boukhars, a nonresident Scholar at Carnegie Endowment, underscored that the stalemate in the conflict has already had a disastrous human impact in the Tindouf camps and terrible economic and political consequences across North Africa.
In light of the growing instabilities in and around North Africa and the difficulties of controlling trans-border terrorism and militancy, the international community is increasingly setting sights on the Western Sahara conflict as a potential stability risk for the region, the author of the paper wrote.