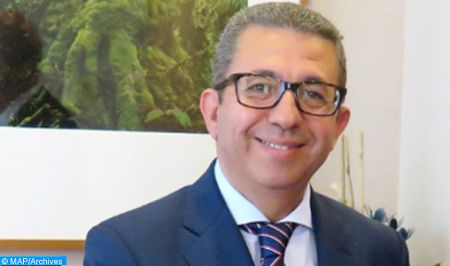 The resumption of Morocco-Israel relations was the focus of a conference organized last Friday in Australia by the Australian-Israeli Council for Jewish Affairs (AIJAC). Speaking on this occasion, the Moroccan ambassador to Australia, Karim Medrek, guest of honor of the meeting, held under the theme “Morocco, Israel and the Jewish world: a new era of relations”, referred to the determining elements of the restoration of relations between Morocco and Israel, notably the historical ties of the Jewish community of Moroccan origin with the Kingdom, the new dynamics and economic prospects for the future between Morocco and Israel, and finally the efforts to consolidate peace and stability in the region. The diplomat highlighted the High solicitude of which the Sovereigns of Morocco, through time, surrounded the Moroccan citizens of Jewish confession. He referred, in this regard, to the categorical rejection of His Majesty Mohammed V of the anti-Jewish laws imposed by the Vichy regime, while Morocco was under protectorate. He also listed the various measures taken to safeguard Jewish history and heritage, including the recognition of the plurality of the Moroccan national identity in the 2011 Constitution, which enshrines the importance of the Hebrew tributary as part of the cultural and historical heritage of Morocco. Medrek added that Morocco has always considered the diversity of its tributaries, as a wealth, in the service of its development, noting that this particularity is declined, today, in the teaching programs, the financing of several projects of restoration and rehabilitation of cemeteries, neighborhoods and Jewish religious sites, making Morocco a reference in teaching peace, tolerance and living together. The diplomat recalled that the resumption of relations between Morocco and Israel responds to the strong ties and the unwavering attachment of the Jewish community of Moroccan origin to its country, stressing that this decision, far from being circumstantial, is on the contrary reflected. Medrek pointed out that this resumption has opened up promising economic prospects for Morocco and Israel and contributed to the revival of trade between the two countries, whose potential is estimated at 500 million dollars per year, which will undoubtedly contribute to the prosperity and development of both countries and pave the way for a new paradigm to achieve peace and stability in the Middle East. In recent months, several bilateral agreements have been signed between the two parties, he said, noting that there are potential investment opportunities in the triangular cooperation. He took this opportunity to invite the Israeli private sector to consider Morocco as a gateway to the African continent to benefit from Moroccan know-how in the region. With regard to the Middle East peace process, Medrek, while indicating that this new dynamic represents an opportunity and a great hope for promoting genuine peace, stressed that the Kingdom is ready to contribute to any constructive peace effort to achieve a just, lasting and equitable solution in the Middle East and allow Palestinians and Israelis to live in peace.