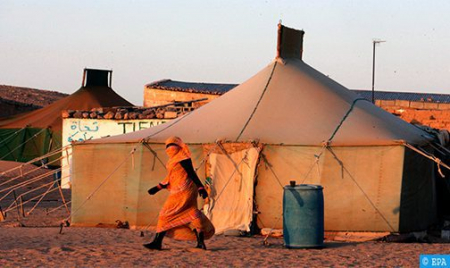 The Moroccan ambassador to Peru, Amin Chaoudri, has condemned the dramatic and inhumane situation of the Sahrawis held against their will in the Tindouf camps in Algeria, who are subjected to immoral and abject manipulation and exploited as an instrument of political blackmail. In this regard, Morocco has never ceased to express its concern at the serious violations of human rights in the Tindouf camps, as well as the inhuman practices and atrocities perpetrated by the Polisario, underlined Mr. Chaoudri at a conference organized by the University of San Ignacio de Loyola under the theme “The human rights situation in the Moroccan Sahara”, within the framework of the 4th Congress of International Relations. The Moroccan diplomat also highlighted the dimensions of the new development model of the southern provinces embodied in various socio-economic projects that pave the way for advanced regionalization and local governance in line with the expectations of the populations and specificities of the region. The ambassador noted that Morocco is constantly defending political stability in North Africa and the Maghreb, underlining the preeminence of the autonomy plan, which constitutes the exclusive framework of the political process aimed at achieving a solution to this artificial conflict, of which Algeria is the main party. The diplomat, who was speaking before 250 students of this prestigious university, stressed that since its independence, Morocco has experienced a great evolution in the area of human rights following the adoption of political pluralism and free initiative, in addition to the adoption of the 2011 Constitution and the accession and ratification of several human rights conventions. The last report presented to the UN Security Council welcomed Morocco’s efforts for the promotion and protection of human rights and fundamental freedoms in the Moroccan Sahara, at a time when human rights violations continue in the Tindouf camps. The San Ignacio de Loyola University Conference was marked by the participation of several Peruvian and foreign personalities, former Peruvian Foreign Ministers, former Peruvian ambassadors, journalists, academics, students and researchers.