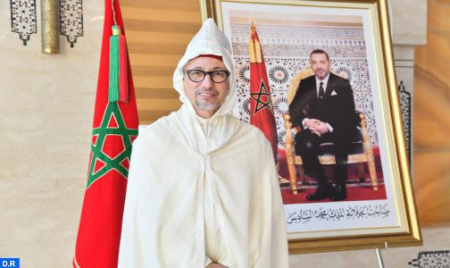 Morocco’s ambassador to Thailand, Abderrahim Rahhaly, on Monday presented the copy of his Letters of Credence to the Director General of Protocol at the Thai Ministry of Foreign Affairs, Chittipat Tongprasroeth. The presentation of the copies of the Letters of Credence was followed by a discussion, during which the Director General welcomed the Ambassador of His Majesty the King, expressed his warm congratulations on his appointment, and wished him success in accomplishing his mission in Thailand, says a press release from the Moroccan embassy in Bangkok. During the discussion, the Director General recalled the excellent relations between the two Kingdoms as well as the potential offered for their cooperation, the statement adds. While expressing his gratitude for the trust that HM King Mohammed VI has placed in him, the Moroccan ambassador expressed his will to honor this trust for the service of the development of the friendly relations between the two countries. Furthermore, the Moroccan diplomat reiterated his commitment to further develop the relations between the two Kingdoms, which are marked by friendship, mutual respect, constant consultation and coordination with regard to matters of common interest. Recalling a set of similarities and complementarities between Morocco and Thailand, the ambassador emphasized his determination to make use of all the means at hand to diversify the areas of cooperation between the two countries and fully benefit from the geographical advantage of both countries, respectively in Africa and Asia.