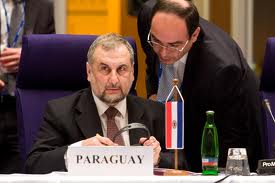 The Polisario and its Algerian protector received slaps in the face twice in less than two months.
The two blows were dealt by Panama and Paraguay which both withdrew their recognition of the self-proclaimed Sahrawi Arab Democratic Republic (SADR).
The SADR was proclaimed by the Polisario in 1976 at the instigation of the Algerian and Libyan regimes.
As the peace process initiated by the UN Security Council is underway, the Paraguayan Government decided to suspend the agreement and Joint Declaration on the Establishment of Diplomatic Relations between the Republic of Paraguay and the SADR, said the Paraguayan Foreign Ministry in a statement.
The statement was referring to an agreement signed between the two parties in New York in February 2000 and to a Joint Declaration initialled in Asuncion in August 2011.
The legal effects entailed by this withdrawal mean the cancellation of all conventions previously signed with the SADR and the severing of all diplomatic relations with the Sahara independence-seeking front, the statement said.
The upper house of the Paraguayan parliament had recently passed a resolution on the SADR recognition withdrawal.
Morocco, through the voice of its Foreign Minister, Salaheddine Mezouar, hailed the Paraguayan government’s decision as “wise” and “constructive.”
Moroccan diplomacy has thus scored a new success in less than two months and gained additional backing to its stand on its territorial integrity, which is threatened by the ambitions of neighboring Algeria.
The latest blows hit hard Algeria and the Polisario, which were so far considering the Latin American sub- continent as fully committed to their causes.
But the situation is changing not only in this part of the world but also in North America, in Europe and particularly in Africa, where many countries have reconsidered their position with respect to the puppet SADR.