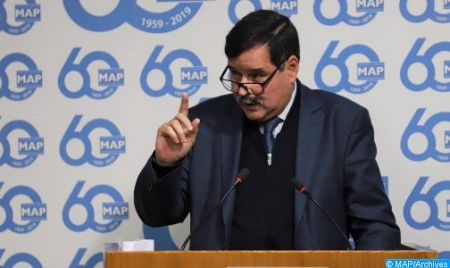 The Algerian regime does not want a settlement of the artificial conflict over the Moroccan Sahara because what counts for it is to serve the agenda of a quarteron of generals, says the journalist-writer, Talaa Saoud Al Atlassi. In an article published on the news website ”Machahid 24” under the evocative title ”In Algeria, the generals bleed the state”, the columnist notes that all those in Algeria who hold power do not want a settlement of the conflict over the Moroccan Sahara because ”what matters most to them is that the status quo continues, giving them the opportunity to consolidate their control over Algeria politically and economically.” “If the interest of Algeria and the Algerian people in the settlement of this artificial conflict about which the international community has established a clear roadmap, promotes the revival of the development of this country and its opening towards a Maghrebian horizon for the peoples of the region of which the Algerian people is a part, the fact remains that in Algeria, there is no state, only a quarteron of generals,” he notes, before adding that “in the current state of affairs, the general interest goes out the window, the decision being monopolized by those who control the workings of the state, in this case the Chief of Staff and the quarteron of generals under his command”. While noting that the Personal Envoy of the UN Secretary General for the Sahara, Staffan De Mistura made his visit to Algeria bearing in mind the latest resolution of the Security Council on the conflict in the Moroccan Sahara and the organization of quadripartite negotiations to find a realistic and sustainable political solution and to which the four stakeholders adhere, Talaa Saoud Al Atlassi stresses that De Mistura’s thinking was based on a “state” response to the UN resolution, but he quickly realized that he was not dealing with a state, but only a desire to prolong the conflict for the benefit of a quarteron of generals who run the country. He points out that ”there is not in Algeria a State according to the agreed definition, only a civil component instrumentalized by a quarteron of generals without official attributes in the workings of the State managing the country as it pleases”. This is why, he underlines, “the international community, including the Arab world, is in Algeria facing representatives of the State who are not the real decision makers. And the worst thing is that the apparent and hidden components of the state are the opposite of the fundamentals of the state, its culture, its balance and its constitutional commitments”. He also notes that “the Algerian regime has adopted a logic specific to the middle of banditry to the detriment of a logic of state in its attitude to the organization of the Arab summit in Algiers, arguing that this band of generals sought to postpone sine die this summit to prevent it from being held in Algeria by interfering in its agenda”. And for good reason, he adds, ”what counts after all for the generals of the Algerian regime is to preserve the interest of their gang by making sure that Morocco remains an enemy and that this enmity worsens further. For they know very well that an Arab summit can never take place without Morocco or against Morocco”. It is for this reason that they have opted for one-upmanship by wanting to make an unlikely association between the Palestinian cause in its historical and pan-Arab dimensions and the independence aspirations provoked and sponsored exclusively by Algeria. An overbid maintained in a media goal to free themselves in the end from the complex of the summit,” he writes. He emphasizes, in this regard, that “since the Algerian regime took the side of this independence illusion in the Moroccan Sahara, the Arab League has always distanced itself from this subject, refusing to discuss the Algerian plea for the recognition of the proclaimed independence movement and this, because of its illegality and also the non-existence of a precedent in the Arab world on the historical and geographical levels. An approach adopted by the member countries. Better still, the majority of Arab League member countries now declare themselves in favor of the Moroccan character of the Sahara and against the independence thesis promoted by Algeria. While noting that the list of the exactions of the generals according to a logic proper to the milieu of banditry and not according to the logic of the State, is long, which complicates the relations between the Algerian regime and the international community, Talaa Saoud Al Atlassi concludes that “a state led by a quarteron of predatory generals is a state that suffers from political anemia, without immunity and lack of foresight. That said, it is necessary today to know the identity of the Algerian state so that the country has a responsible and patriotic interlocutor both internally and externally, an interlocutor who does not cause external crisis or invent a foreign enemy that serves as a scarecrow to divert attention from its internal crises and the popular uprising that is igniting”.