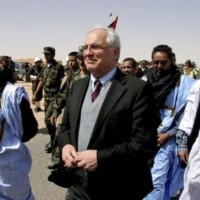 The UN mediator for the Western Sahara is to resume his shuttle in the Maghreb region early March in a new attempt to bring Moroccans and Polisario leaders together for direct negotiations.
In Western Sahara, however, people are pretty sure that the new tour of the UN Special Envoy, Christopher Ross, will bring in nothing new. These sceptics argue that the UN mediator’s approach can not succeed as long as the Algerian government has not changed its standpoint.
According to an expert from a Rabat-based UN agency, as long as the Algerian regime is stubbornly perpetuating the status quo, Morocco and the Polisario are not going to sit around the same table for direct negotiations without preconditions.
Morocco has gradually shown flexibility as evidenced by its proposal to grant large autonomy to the disputed area while the Polisario leaders, apparently prisoners of Algerian paternalism, stick to their initial position calling for the organization of a self-determination referendum, said the expert.
The Polisario leader, Mohamed Abdelaziz, and his lieutenants have not managed to break free from the tightening grip of the Algerian army generals who are acting behind the scenes, commented a former Spanish diplomat who was positioned in Algiers.
The Polisario is a trade-off trump that the Algerian regime’s strategists want to use against Morocco which they consider as a serious challenger vying for regional leadership in the Maghreb and West Africa, said the former diplomat over the phone.
He deemed that given the current situation, Ross will find it extremely difficult to gather the conflicting parties around the same table.
In his analysis, the former diplomat joined his co-citizen journalist and writer Chema Gil who affirms that the Polisario is “an Algerian fictional concoction, totally contrived.”
In a new book titled “the Polisario: the story of a front against human rights and international security,” Chema Gil who knows the historical background of the Western Sahara issue, argues that at the time of the Cold War, the rulers of Algiers had created the Polisario separatists and their whimsical Sahrawi republic on their soil, hoping to put pressure on Morocco to gain access to the Atlantic seaboard.
As Algerians got tired of waiting for their dream to come true, they closed their border with Morocco and continued using the Polisario and the populations in The Tindouf camps as a pressure means on neighboring Morocco.