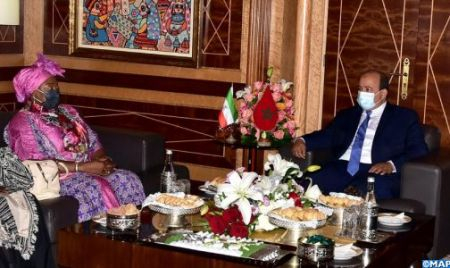 Speaker of the House of Advisors, Naama Mayara, stressed Tuesday the importance of parliamentary diplomacy in the consolidation of relations between Morocco and Equatorial Guinea. During a meeting with speaker of the Equatorial Guinean Senate, Teresa Efua Asangono, at the headquarters of the House of Advisors, Mayara hailed the relations of mutual respect and good cooperation linking the two countries, said a statement by the upper house. He also highlighted the importance of parliamentary diplomacy in consolidating bilateral ties and deepening the agreement and dialogue between the representatives of the two friendly peoples, to bring together and unify the visions and views on several bilateral and multilateral issues, according to the same source. In this regard, Mayara called to explore ways to take advantage of the unique and diverse composition of the upper house to establish a parliamentary, political and economic dialogue between the two legislative institutions of the two friendly countries, through proposing the signing of a memorandum of understanding. He praised the support and the constant position of Equatorial Guinea in favor of the issue of the territorial integrity of the Kingdom. Efua Asangono noted that relations between her country and Morocco are “historical, spanning more than 40 years and are characterized by their strength,” noting that the Moroccan and Equatorial Guinean peoples are also united by ties of brotherhood. The participation of Equatorial Guinea in the 10th conference of the Association of Senates, Shoora and Equivalent Councils of Africa and the Arab World (ASSECAA) as well as in the forum of parliamentary dialogue of ASSECAA, Latin America and the Caribbean, which will be organized by the House of Advisors from 03 to 05 March, is an important event because it is the first Equatoguinean participation in this parliamentary gathering, she said. Efua Asangono also noted that her visit to Morocco at the invitation of Mayara, is particularly positive, noting that participation in the Forum will allow to acquire more experience in connection with the partnership between African, Arab and Latin American parliaments. On the occasion of their meeting, the two parties reaffirmed their willingness to continue strengthening and consolidating parliamentary cooperation relations between the House of Advisors and the Senate of Equatorial Guinea, as well as intensifying coordination and consultation between the parliaments of both countries in various regional and international parliamentary forums on issues of common interest.