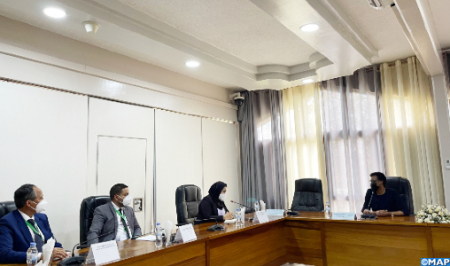 The Rwandan parliamentary delegation which took part in the 77th session of the Executive Committee of the African Parliamentary Union (APU), held in Kigali, hailed, Friday, the ‘active and relevant’ participation of Morocco in this meeting. The Rwandan delegation, led by the speaker of the Rwandan parliament, Donatille Mukabalisa, welcomed the contributions made by Moroccan MPs to this African meeting, particularly with regards to the successful experience of the Kingdom in the fight against the Covid-19 pandemic, economic recovery and gender promotion. During a meeting with the Moroccan parliamentary delegation, held on the sidelines of the 77th session of the APU Executive Committee, the speaker of the Rwandan parliament stressed the distinguished role of the Kingdom at the continental level and the importance of benefiting from its experiences in several areas related to socio-economic development. In this regard, Mukabalisa welcomed the proactive policy of South-South cooperation advocated by Morocco, as well as its contributions in regional and continental parliamentary forums. For his part, Mussa Fazil Harerimana, the Deputy Speaker of the Rwandan Chamber of Deputies, underlined that “Morocco is a centuries-old country with a great history and a unique cultural diversity,” noting that over the centuries, the Kingdom has become an experienced country in many strategic areas. Hailing Morocco’s leadership and its ‘remarkable’ progress in several vital sectors, Harerimana expressed his country’s willingness to deepen Morocco-Rwandan cooperation relations, especially through the parliamentary institutions of both countries. In addition, members of the Rwandan parliamentary delegation referred to the ‘excellent’ relations between Rabat and Kigali, mentioning, in particular, the regular exchanges of visits of officials and parliamentary delegations on both sides, as well as the cooperation agreements signed between the two countries after the visits made by Rwandan President Paul Kagame to Morocco, in June 2016, as well as the visit of HM King Mohammed VI to Rwanda, in October of the same year. Morocco is represented at the 77th session of the APU Executive Committee by a delegation made up of MPs Cherkaoui Znaidi, Nadia Bouzendoua and Khalihenna El Karch, in addition to Rachida El Alaoui, in charge of international cooperation at the House of Representatives (Lower House). The 77th session of the Executive Committee of the African Parliamentary Union (APU) kicked off Thursday in Kigali, with the participation of 120 delegates representing 41 African parliaments. According to the APU, this session will be an opportunity to share best practices in the response to the Covid-19 pandemic, the promotion of good governance and innovation, the post-Covid economic recovery as well as the implementation of the agreement of the African Continental Free Trade Area (AfCFTA).