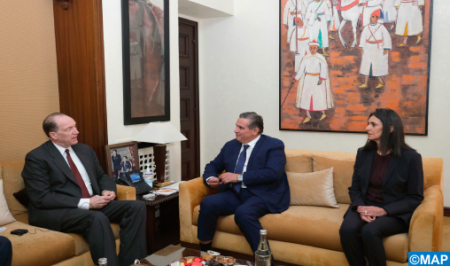 Head of Government Aziz Akhannouch held, on Wednesday in Rabat, talks with the President of the World Bank Group, David Malpass. This meeting took place in the presence of the Minister of Economy and Finance, Nadia Fettah Alaoui, the Director of Treasury and External Finance, Faouzia Zaaboul, the Vice President of the World Bank for the Middle East and North Africa Region, Ferid Belhaj, the Country Director for the Maghreb and Malta at the World Bank, Jesko Hentschel and the Director of the International Finance Corporation (IFC) for the Maghreb, Xavier Reille. This meeting is an opportunity to highlight the quality of relations between the Kingdom and the World Bank Group, as well as to discuss ways to promote cooperation between the two parties and support the strategies and programs developed by Morocco, under the leadership of HM King Mohammed VI. On this occasion, Malpass reiterated the Group’s commitment to accompany the economic and social development that Morocco is experiencing, stressing that the Kingdom has “the necessary means to emerge from this crisis.” The President of the World Group was also pleased with this fruitful meeting, noting that “it was an opportunity to discuss major challenges that should be addressed urgently, including inflation and prices of raw materials and energy.” For his part, Akhannouch said he was proud of “this strategic partnership” with the World Bank to back the economic and social development of the Kingdom, reviewing the major structuring projects of the national economy and the various reforms initiated beforehand. The Government chief also reaffirmed the Kingdom’s determination to continue implementing a set of measures aimed at reducing the impact of the pandemic, stimulating private investment and boosting the national economy. Malpass’ visit to Morocco for the first time as World Bank President reaffirms the Group’s commitment to work with Morocco to achieve better development outcomes for all its citizens.