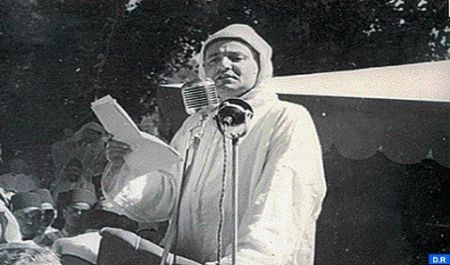 It is in piety and meditation that the Moroccan people commemorate this Tuesday, Ramadan 10, the 63rd anniversary of the death of His Majesty King Mohammed V, Father of the Nation, craftsman of independence and symbol of the struggle of peoples for freedom and emancipation. It is a duty of recognition to the memory of a King who gave himself, body and soul, to the cause of the independence of Morocco and made countless sacrifices to achieve his dearest dream which was that of all Moroccans: to see the last soldier of the protectorate leave the national territory, to devote himself to the colossal work of building a State of law and democracy. Just four years after the proclamation of the Kingdom’s independence, the late Sovereign passed away on the 10th day of Ramadan of the year 1380 of the Hegira (February 26, 1961), leaving Moroccans with the memory of a patriotic, committed and courageous King who dedicated his life to the just cause of his country, braving for this purpose countless difficulties and facing the shenanigans hatched by the colonial authorities, without losing any of his faith and his determination. In his relentless struggle for independence, the late King Mohammed V insisted on consultation and coordination with the National Movement, convinced that the recovery of sovereignty could not be the work of a single person or a single institution, but the fruit of a collective action based on faith and the effort to raise awareness and mobilize the Moroccan people. The culmination of this collective nationalist action was the presentation, on January 11, 1944, of the Independence Manifesto, a bold step that reflected the perfect symbiosis between the Throne, the national movement and the people, and constituted the first step on the road to liberation from the yoke of the protectorate. On April 10, 1947, Sultan Mohammed Ben Youssef went to Tangier to deliver a resounding speech that would leave its mark on history and on people’s minds. And for good reason, the Sovereign solemnly and explicitly formulated, for the first time, the claim of Morocco’s independence, thus giving cold sweats to the colonial authorities who, pushed into their last entrenchments, were going to do hand and foot to regain control of the situation. After the failure of all their shenanigans, blackmails and threats intended to put pressure on the late HM Mohammed V to abandon the national struggle, the colonialists set up a sordid plot against the Sultan and the Royal Family who were forced into exile, one sad day in August 1953, first in Corsica, then in Madagascar. The sinister ploy of the occupier backfired. Aiming to cut the bridges between the late King and his faithful people, the deportation of Sultan Mohammed Ben Youssef further welded the people and the national movement behind him, triggered a wave of popular riots and armed actions against the colonial forces, and made independence the cause, no longer of an elite of nationalist politicians and intellectuals, but of a whole people mobilized behind their Sovereign. This beautiful epic of patriotism, bravery and fidelity was crowned by the triumphant return of the Father of the Nation and the Royal Family to the motherland, on November 16, 1955, and the announcement, one year later, of independence and the beginning of the “great Jihad”, that of the building of a new and modern Morocco. After the recovery of the Kingdom’s independence and in the same spirit of the Father of the Nation, His Majesty the late Hassan II, companion of the hero of independence, continued the work of consolidating the achievements, by engaging in a large-scale program for the economic and social development of the country, before His worthy successor, His Majesty King Mohammed VI, took the torch to continue the work of His predecessors with determination and abnegation. Thus, His Majesty King Mohammed VI, may God assist Him, has been committed, since His accession to the Throne of His Glorious Ancestors, to the consolidation of this great national project, thus bringing Morocco into a new era, that of modernity and development.