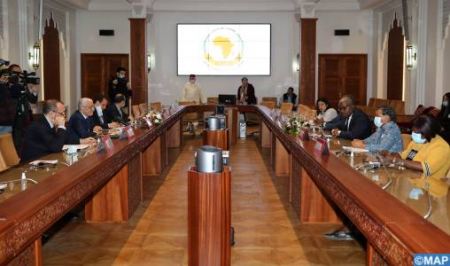 The Speaker of the House of Representatives (lower house), Rachid Talbi Alami, held talks on Thursday with Remy Ngoy Lumbu, Chairman of the African Commission on Human and People’s Rights, currently visiting Morocco. At the beginning, Ngoy Lumbu presented the Commission’s structure and competencies, noting that his visit to Morocco is part of the National Human Rights Council’s advocacy together with that of the Commission on the African Charter on Human and Peoples’ Rights, and the promotion of dialogue. Ngoy Lumbu said that his meeting with the lower house speaker and other institutional and civil stakeholders aims to generate a debate on the said African Charter and interaction with the African human rights system. It also aims to contribute to efforts aimed at broadening the basis of adherence to the African Charter and identifying the opportunities and obligations that will result, in addition to the modalities of interaction of each component of the national system with the African human rights system. For his part, Talbi El Alami reviewed Morocco’s progress and achievements in the field of human rights and freedoms over the past two decades under the leadership of HM King Mohammed VI. In the same vein, he highlighted the Moroccan experience in the field of transitional justice and reparation of wrongs, as well as the provisions of the Moroccan Constitution which underline the Kingdom’s commitment to human rights as universally recognized. Talbi El Alami also highlighted his House’s prerogatives and role in the protection and promotion of human rights, in the areas of legislation, monitoring of government action through written and oral questions and evaluation of related public policies, among others. In the same vein, he recalled the achievements of the House during the last decade, which have enabled it to occupy a distinct position in many bodies and continental, regional and international parliamentary organizations. Talbi Alami also expressed the willingness of the Chamber to share its experience with various institutions, bodies and commissions, and to consolidate the benefit of the said experience, especially in the field of human rights and freedoms.