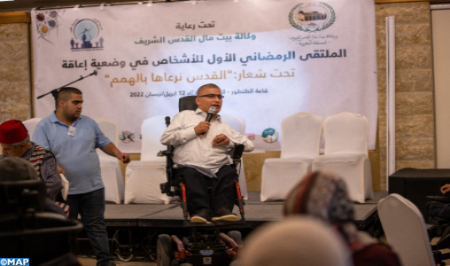 The first annual meeting of people with disabilities was held on Tuesday in Al-Quds with the support and sponsorship of Bayt Mal Al-Quds Asharif Agency. The event, organized by the Arab Association of People with Disabilities in Al-Quds, was attended by representatives of and members of Maqdissi associations working with people with disabilities, under the sign “We watch over Al-Quds with determination.” On this occasion, Bayt Mal Al-Quds Asharif Agency donated a batch of biomedical equipment, consisting of wheelchairs, light equipment for people suffering from deafness and aphasia, as well as smartwatches to facilitate reading and writing. During this event, the Agency announced that April 12 of each year was chosen as the date for holding the annual meeting of people with disabilities. The Director in charge of the management of the Agency, Mohamed Salem Cherkaoui noted that the choice of April 12 reflects the common will to enshrine the social and human character of the Agency’s programs implemented in Al-Quds, under the high instructions of His Majesty King Mohammed VI, Chairman of the Al-Quds Committee. In a speech read on his behalf, Cherkaoui noted that the Agency’s duty is to provide, to the extent possible, the necessary assistance to this fringe of society and allow them to enjoy all their rights, including the right to education, health, work and mobility. For his part, Mustapha Abou Zahra, president of the Arab Association of People with Disabilities, expressed his thanks and gratitude to HM King Mohammed VI, Amir Al Mouminine, for the Agency’s support for this annual meeting and people with disabilities. He also praised the initiatives of the Bayt Mal Al-Quds Asharif Agency in the Holy City, as well as its new dynamic in supporting all Maqdissis. Since the beginning of the blessed month of Ramadan, the Agency launched a social and humanitarian assistance campaign including a food aid program that has already benefited 400 families, a cultural animation program with the participation of the cultural centers of the Holy City, namely “Yabus” and “The Palestinian National Theater”. A community animation program was also launched with local associations in addition to the annual meeting of people with disabilities and people with special needs.