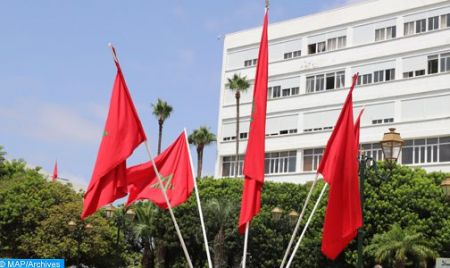 President of the Palestinian National Council (PNC), Rouhi Fatouh, on Wednesday commended the strong stance of the Kingdom of Morocco regarding the legitimate rights of the Palestinian people, including the establishment of an independent State within the 1967 borders with Al-Quds East as its capital. During talks with Morocco’s ambassador to Palestine, Abdel Rahim Meziane, the Palestinian official expressed the deep gratitude of the Palestinian leaders to His Majesty King Mohammed VI, Chairman of the Al-Quds Committee, while welcoming the efforts made by the Sovereign to support the Palestinian cause and defend the legitimate rights of the Palestinians and the resilience of the Maqdissis. The president of the CNP said he was proud of the historic relations that bind him personally to several Moroccan politicians, whom he used to meet at summits and conferences hosted by the Kingdom or organized abroad. These officials, he pointed out, express Morocco’s unconditional support for the just Palestinian cause. Mr. Fatouh, who is one of the eminent personalities who enjoy the respect and esteem of the various Palestinian currents and factions, stressed the absolute rejection by the Palestinians of the partition and fragmentation plans to which the Arab world is exposed, based on their sense of national belonging and their determination to defend the territorial integrity of all Arab countries without exception. He also reviewed the latest developments in the Palestinian cause and the escalation against Al-Quds Al-Sharif, the Israeli attacks in the Al-Aqsa Mosque, the assaults on worshipers, in addition to the violations committed against the Palestinian people and the repeated incursions. For his part, the Moroccan ambassador stressed the depth of Moroccan-Palestinian relations and the determination of the Kingdom, under the leadership of His Majesty King Mohammed VI, Chairman of the Al-Quds Committee, to strengthen them in all areas, including supporting the inalienable rights of the Palestinian people, defending the historical and legal status of the Holy City, and supporting the resilience of the Maqdissis in the face of systematic policies of Judaization, through the pioneering role played by the Bayt Mal Al Quds Agency in various social, health, educational and cultural and sectors. He also reiterated the strong position of the Kingdom of Morocco regarding the just Palestinian cause and the establishment of an independent Palestinian State within the 1967 borders with Al-Quds-East as its capital.