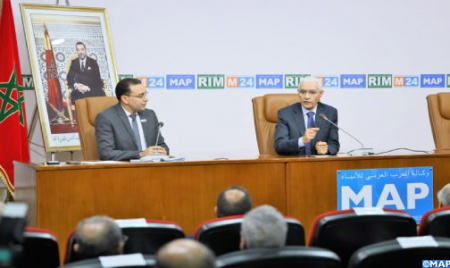 Thanks to the wise and far-sighted policy of HM King Mohammed VI, Morocco enjoys great esteem within international bodies and forums, underlined Tuesday the Speaker of the House of Representatives (lower house), Rachid Talbi Alami. Talbi Alami, who was the guest of MAP Forum to discuss the “challenges and prospects for parliamentary action in a turbulent national and international context”, noted that Morocco’s international stature draws on the achievements made thanks to the far-sighted leadership of HM the King, in the management of priority issues on a global scale such as the protection of the environment. He stressed, in this regard, that thanks to this influence, many international organizations seek to hold their forums and meetings in the Kingdom. Mr. Talbi Alami also mentioned the role played by the House of Representatives in terms of parliamentary diplomacy to consolidate the achievements made, highlighting the remarkable presence of members of the House at various international meetings, in addition to the membership of the legislative institution in 18 parliamentary sections where it enjoys the right to vote. With regard to the latest developments in the issue of the territorial integrity of the Kingdom, the Speaker of the Lower House underlined that the change that took place in the region following the U.S. recognition of the Moroccanness of the Sahara requires to be present in all fora and “not to leave the chair empty”. He also highlighted the House’s “serious and proactive” action in terms of parliamentary diplomacy through the preparatory meetings it holds with the various sections and friendship committees, as well as with the executives of the Ministry of Foreign Affairs, African Cooperation and Moroccans Abroad, with a view to unifying views and determining the topics on the agenda. MAP Forum, which is a platform for debate on current political, economic, cultural and social issues, is attended by representatives of public authorities and personalities from various backgrounds as well as media representatives.