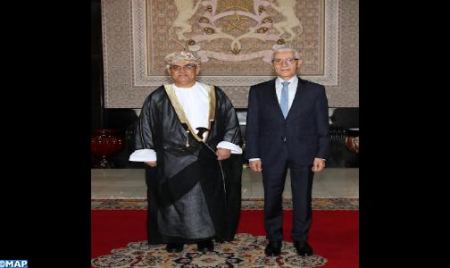 Speaker of the House of Representatives (lower house), Rachid Talbi Alami, on Thursday held talks with the ambassador of the Sultanate of Oman to Morocco, Said Ben Mohamed Al Baraami. This meeting was an opportunity to exchange about several bilateral, regional and international parliamentary issues of common interest, said a statement from the Lower House. On this occasion, Talbi Alami praised the depth of historical and cultural ties between the Kingdom of Morocco and the Sultanate of Oman, highlighting the quality of bilateral parliamentary relations that have been strengthened in recent years, which has helped preserve the achievements made and consolidate communication between MPs of both countries, with the aim of ensuring a permanent and effective coordination. For his part, Said Ben Mohamed Al Baraami welcomed the quality of the historical and cultural ties between the Kingdom of Morocco and the Sultanate of Oman, expressing his admiration for the Moroccan experience, similar in many aspects to the Omani experience, according to the statement. The diplomat reaffirmed the unwavering stance of his country in favor of the territorial integrity of the Kingdom and the autonomy plan, stressing that this position dates back to 1975 and has not changed and that Muscat supports Rabat’s positions in various international forums. He also stressed the importance of strengthening bilateral relations in the commercial, economic and cultural fields, noting the quality and historical depth of parliamentary relations between the two countries, according to the same source. The Sultanate of Oman seeks to further strengthen these relations at the bilateral and multilateral levels through the exchange of visits, friendship groups and continuous parliamentary coordination, Al Baraami noted.