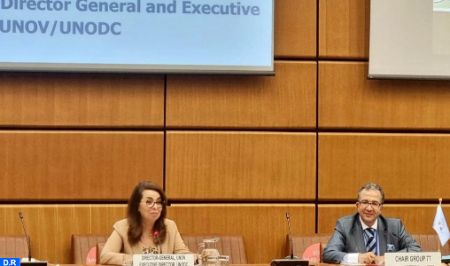 A meeting under the chairmanship of Morocco of the board of ambassadors of the G77 group of the Vienna Chapter, was held recently in Vienna to present the priorities of the group in relation to issues on the agenda of the United Nations Office on Drugs and Crime (UNODC). This meeting, which is part of the implementation of the roadmap of the Moroccan presidency of the G77 Vienna Chapter for the year 2022, was marked by constructive exchanges with Ghada Waly, Executive Director of UNODC about the activities and strategy of the Office in relation to Africa, Latin America and Asia. Speaking at the opening of the meeting, Ambassador Azzeddine Farhane, Permanent Representative of Morocco to the United Nations Office and International Organizations in Vienna, noted that in his capacity as Chairman of the G77 Vienna Chapter, that “productive dialogue and close interaction with the heads of Vienna-based organizations remain a priority” for the Moroccan Presidency of the Group. On behalf of the Group, he praised the launch by UNODC of a strategic vision for Africa 2030 and Latin America and the Caribbean for 2022-2025, as well as the implementation of the ambitious Regional Program (RP) for 2022-2026 for the South-East Asia and Pacific region (SEAP). “These strategies include strengthening crime prevention, improving the justice system, ensuring a balanced response to drug scourges, improving the rule of law, building resilience and safely and effectively contributing to international efforts to address the most pressing challenges and threats to sustainable development in our time,” he stressed. On the other hand, he pointed out that the G77 countries belong to a region characterized by its asymmetry in terms of development, aggravated by the Covid-19 pandemic, which has led to the emergence of problems in some regions and countries and opportunities in others, particularly in the area of local capacity building and national institution building. He added, “The G77 considers UNODC a valuable and necessary partner. “Close cooperation and a collaborative approach could facilitate the achievement of the sustainable development goals, by strengthening the presence of UNODC in the G77 countries, through its regional and country offices, increasing its technical, material and human capacities, deepening and broadening the areas of action within the mandate of UNODC,” he noted. Speaking on this occasion, Waly welcomed the holding of “this valuable initiative” undertaken by the Moroccan presidency of the G-77 (Vienna Chapter) in order “to establish a dialogue with the heads of organizations based in the Austrian capital at a time when dialogue is particularly necessary”.