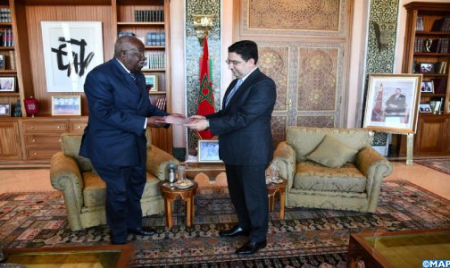 Minister of Foreign Affairs, African Cooperation and Moroccans Abroad, Nasser Bourita received, on Friday, the Ambassador-at-Large of the Republic of Angola, Bernardo Mbala Dombele, who was carrying a message to HM King Mohammed VI from Angolan President, João Lourenço. At the end of this meeting, Dombele stressed, in a statement to the press, the need to strengthen the friendly relations between Angola and Morocco, two countries that share a common history. “Angola and Morocco have a common history. Morocco was the first country to support Angola through the Popular Movement for the Liberation of Angola, and the first president of the Republic of Angola, António Agostinho Neto, had a friendly relationship with the Kingdom,” he added. “Therefore, we consider Morocco a friend of Angola, and the two countries should maintain and further strengthen their relations,” he said.