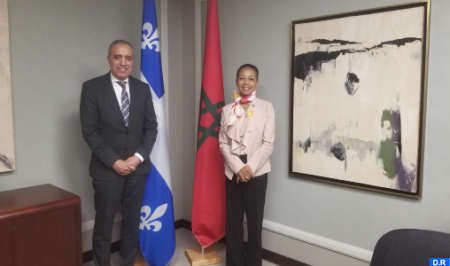 The strengthening of cooperation relations between Morocco and Quebec was the focus of a meeting, Friday in Montreal, between the Consul General of the Kingdom in Montreal, M’hamed Ifriquine and Minister of International Relations and Francophonie of the Canadian province, Nadine Girault. During this meeting, Girault said she was pleased to exchange with the Moroccan diplomat on the state of relations between the Kingdom and Quebec, as well as on the means to further develop them, said a statement by the Consulate General of Morocco. The government of the Canadian province attaches particular importance to its relations with Morocco, she said, citing the opening in Rabat of the Quebec Office and the assignment of a scientific representative. Girault also reported a forthcoming visit to Morocco of a Quebec trade delegation to identify new areas of bilateral cooperation. For his part, Ifriquine recalled that Morocco and Canada celebrate this year the 60th anniversary of the establishment of their diplomatic relations, noting that this is an appropriate opportunity to review bilateral relations and give them a new breath. Relations between the Kingdom and Quebec, he said, are a “considerable” component of Moroccan-Canadian relations, particularly in the areas of trade, education and culture. The diplomat referred, in this context, to the events organized by the Embassy of the Kingdom of Morocco in Ottawa and the Consulates General in Montreal and Toronto to celebrate this anniversary, including the academic day in partnership with the Quebec public university Concordia. During this event, Moroccan researchers and their Canadian counterparts were able to identify opportunities for cooperation, particularly in the areas of clean energy, he said. Ifriquine also cited the screening of the Moroccan film “Vue d’Afrique” at the opening of the Montreal Film Festival and the unveiling next week of a commemorative plaque in honor of Fatima Al-Fihriya at the Alex-Trebek Alumni Building at the University of Ottawa. On this cultural component, the Moroccan Cultural Center in Montreal plays, he said, an important role in bringing together the two countries through the promotion of exchanges based on common values of sharing and living together. After highlighting the importance of intensifying exchanges of economic missions to identify investment opportunities and collaboration in various fields, the Moroccan diplomat welcomed the close cooperation in the education and training sector, expressing the wish to extend it to vocational training to meet the needs of various emerging sectors.