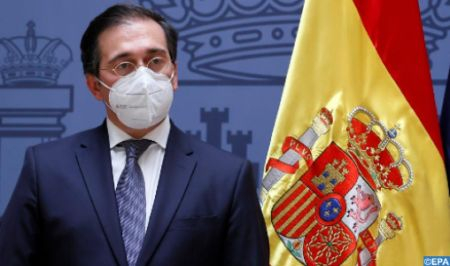 Engaged in an ambitious new road map, Spain and Morocco are working together to make their cooperation relationship increasingly beneficial, Spanish Foreign Minister José Manuel Albares stated. “We are entering with Morocco a new stage of trust based on mutual respect and the absence of unilateral actions. Both countries are working to make their relationship more and more beneficial,” said Albares who was the guest of a TV program broadcast on Spanish public television TVE on Friday evening. The dynamic set in motion between the two countries, which is marked by the resumption of working group meetings, is “beneficial for both Spain and Morocco,” stressed Spain’s diplomacy chief, who recalled in that regard the meetings held on Thursday and Friday in Rabat, of the Moroccan-Spanish Joint Committee on Transit and the Permanent Spanish-Moroccan Group on Migration. The Spanish official welcomed the resumption of the operation “Marhaba”, scheduled for this summer after two years of interruption due to the health crisis caused by the spread of Covid-19, stressing the benefits of this operation for Spain, especially for the ports of Andalusia. The new page opened between the two countries has strengthened the fight against illegal immigration, he went on, saying that the number of illegal immigrants arriving at the Canary Islands has dropped by 45% thanks to the work done by the Bilateral Migration Group. With regard to counter-terrorism cooperation, Albares stressed the role of Morocco and highlighted the importance of the upcoming meeting of the international coalition against Daesh, due on May 11 in Marrakech. “We need Morocco’s cooperation in the fight against jihadist terrorism,” the Spanish official concluded.