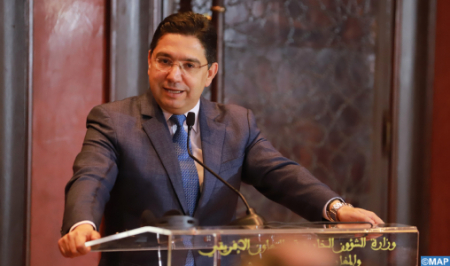 The support of the Spanish government for the Moroccan autonomy initiative is part of an international dynamic to settle the artificial conflict over the Sahara, underlined on Tuesday in Marrakech the Minister of Foreign Affairs, African Cooperation and Moroccans Abroad, Nasser Bourita. “The Spanish government’s support for the Moroccan autonomy initiative as the most appropriate and credible framework to settle the Moroccan Sahara issue is part of an international dynamic to resolve this artificial conflict”, noted Mr. Bourita, who was speaking at a joint press briefing with his Spanish counterpart, José Manuel Albares, following their talks which took place on the eve of the Ministerial Meeting of the Global Coalition against Daesh. “The Kingdom highly welcomes the new stance” of Madrid, said Mr. Bourita, adding that this position is in full harmony with the vision of the Security Council, the orientations of the living forces of the international community, as well as the position of many European countries and most Arab and African countries. In this regard, Mr. Bourita stressed that “the parties who want to find a solution to this artificial conflict must engage in the only possible framework: the Moroccan autonomy initiative”. “Anyone who wants this conflict to continue with the instability it is creating in the region and the suffering it is inflicting on the detainees in the Tindouf camps can continue to encourage the status quo, which has persisted for four decades and could continue if there is no mobilization to resolve this conflict in the framework of the only possible solution,” he pointed out.